23 strikers arrested after dispersal at food plant in Pasig 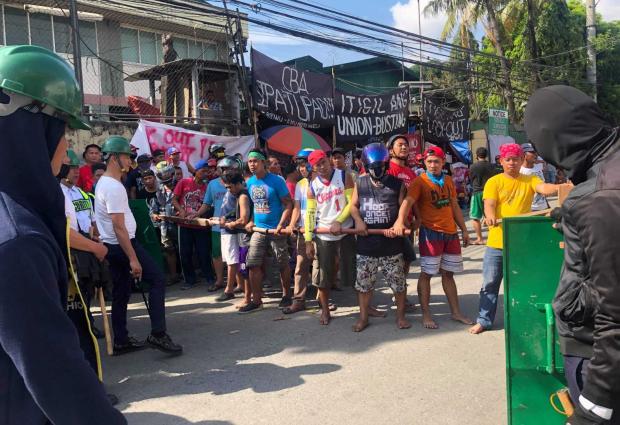 Members of the Regency Foods Workers Union stage a picket in front of their firm’s main plant in Pasig on Saturday, Nov. 9., 2019. (Photo from Pasig City Police Station)

MANILA, Philippines — Striking workers of Regent Food Corp. who staged a picket on Saturday in front of the firm’s main plant in Pasig clashed with security guards and police officers, resulting in their dispersal and the arrest of 23 of their members.

According to the Eastern Police District (EPD), over 50 members of the Regent Foods Workers Union have been on strike for two weeks over cases of unfair labor practices and union-busting.

Among their demands were the regularization of contractual workers and a salary increase.

Before the violent dispersal, Col. Moises Villaceran Jr., chief of the Pasig City Police Station, talked with the union leaders and the firm’s security personnel.

After the Villaceran left the area, the strikers became unruly and threw stones and other items at the security personnel and even members of the City Disturbance Management contingent from the Philippine National Police.

Police officers then dispersed the group and arrested 23 strikers, who were detained at the Pasig City Police Station.

“We vehemently condemn the violent dispersal against the workers who did nothing but wish for regularization, decent pay, and benefits,” Gaite said in Filipino in a separate statement.