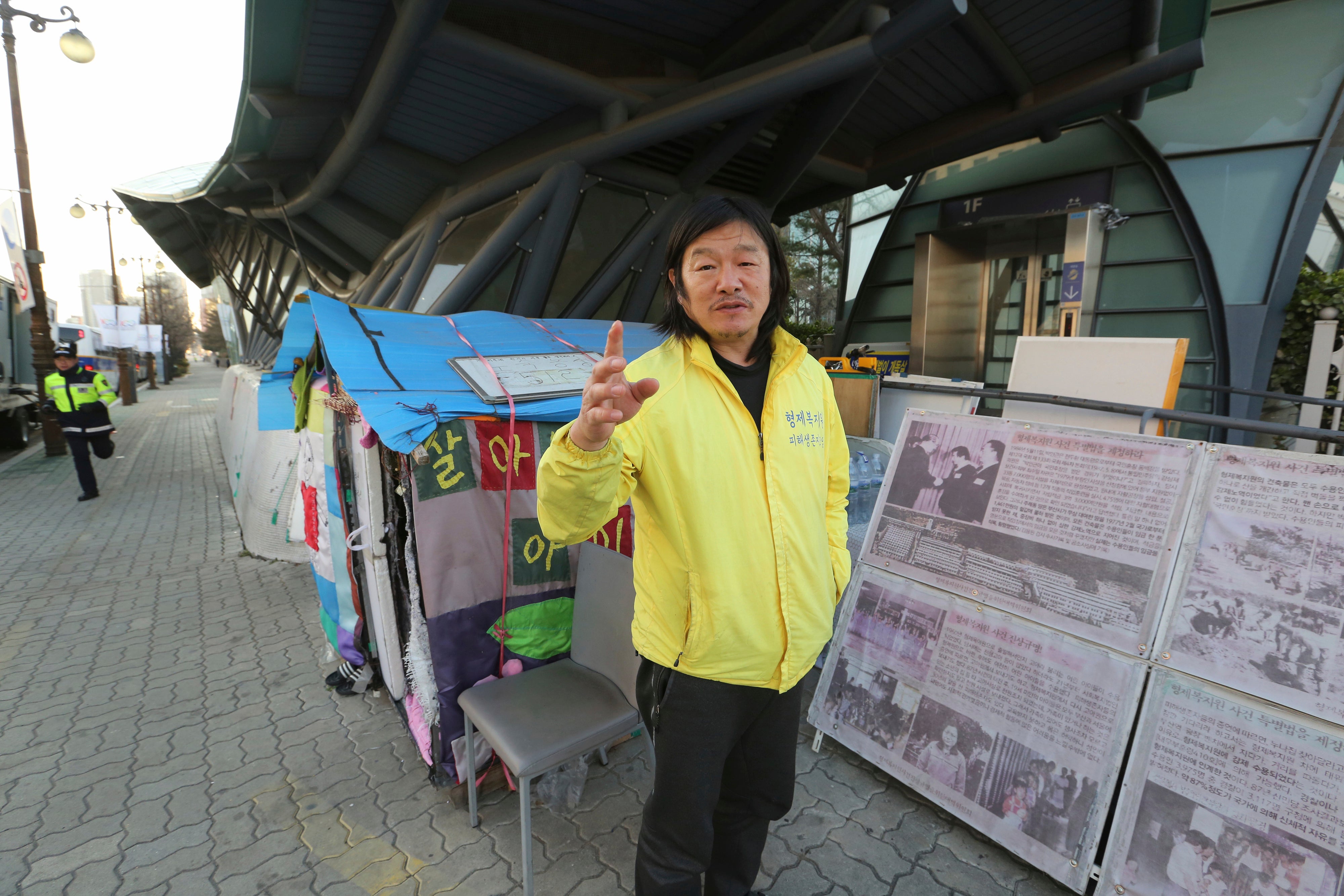 In this April 2, 2019, photo, Choi Seung-woo, a victim of Brothers Home, speaks during an interview in front of National Assembly in Seoul, South Korea. Choi and a small number of other Brothers Home inmates have been camping out in front of the National Assembly’s gate for more than two years calling for lawmakers to pass a bill that would launch a full investigation into past human rights atrocities, including the Brothers Home incident. Notorious South Korean facility that kidnapped, abused and enslaved children and the disabled for a generation was also shipping children overseas for adoption as part of a massive profit-seeking enterprise. (AP Photo/Ahn Young-joon)

BUSAN, South Korea  — A notorious South Korean facility that kidnapped, abused and enslaved children and the disabled for a generation was also shipping children overseas for adoption, part of a massive profit-seeking enterprise that thrived by exploiting those trapped within its walls, The Associated Press has found.

The AP, which previously exposed a government cover-up at Brothers Home and a far greater level of abuse than earlier known, has now found that the facility was part of an orphanage pipeline feeding the demand of private adoption agencies.

Relying on government documents obtained from officials, lawmakers or from freedom of information requests, the AP uncovered direct evidence that 19 children were adopted out of Brothers and sent abroad, as well as indirect evidence showing at least 51 more such adoptions. The adoptions AP found took place between 1979 and 1986.

There were probably many more adoptions over the three decades that Brothers, the largest facility of its kind in the nation, was in operation, but the full extent will likely never be known.

Most relevant documents have been lost, destroyed or withheld by the government and adoption agencies, which falsified the origins of many of the children they obtained.

The AP, however, found one of the adoptees.

“One of my main questions is wondering if I was supposed to be (at Brothers), or if my parents, my biological parents, are still out there looking for me,” said Hwang, who didn’t know she had been at Brothers. “Why me?”

The previous AP investigation uncovered new details about the government-sponsored Brothers, where from the 1960s to the late 1980s thousands of children and adults that authorities deemed “vagrants” were rounded up and kept. Many were enslaved, raped and, in hundreds of cases, beaten to death or left to die, their bodies dumped like trash in the woods.

But Brothers was also separating young children for adoption, according to a review of hundreds of previously unreported records and interviews with former inmates who saw the process play out. Brothers then sent these children to adoption agencies, which placed them with families in North America, Europe and Australia.

During that period, South Korea’s ruling military dictatorships aggressively institutionalized and exported poor children for profit and to clear the streets of those considered socially unacceptable. In Brothers’ heyday, adoptions brought the country as much as $20 million a year by some estimates. The new revelation that Brothers was part of this corrupt system further widens the shadow cast by its abuse.

Adoptive parents in the West were unaware of the horrors that were happening at the place their children once lived or that their payments likely helped fund an abusive facility that used slave labor to enrich its owner. Biological parents may not have known that their children were at Brothers, let alone sent overseas.

Lee Chae-sik, now 50, worked as a boy at the Brothers nursery, which held as many as 80 infants and toddlers at any time, from newborns to 4-year-olds. Once a month, for two years in the early 1980s, Lee said he made his way through a stack of letters bound for North America.

Each letter was attached to a photo of a foreign couple and another photo of a Brothers child.

Over and over, hundreds of times, Lee wrote: “We have received the money and gifts you sent us. Thank you.” The letters addressed the foreign couples as “yangbumo,” which typically is translated as adoptive parents but could also refer to foster parents.

One of the nannies at the nursery, he said, would then take the photos and file them together in a folder with the word “Holt” written on it. Holt could either refer to a U.S. adoption agency by that name or to a South Korean agency that separated from it in the 1970s but continued to share the name.

Dozens of times, according to Lee, the children in the photos would disappear from Brothers just days after the letters were sent. Lee said he always wondered whether the biological parents of those children knew they had been brought to Brothers and then sent abroad.

Lee said he has “no doubt” that the Brothers owner was selling babies for profit.

Park Gyeong-bo, who was confined at Brothers from 1975 to 1980, said guards would occasionally dress up children for formal photos that inmates thought were for adoption papers because the children would later vanish disappear.

Former Brothers inmate Lee Hye-yul said she was 7 and her brother 5 when she was told by an official who worked in the Brothers’ nursery that she would be sent to a family in Britain that had sent money.

Lee cried and begged for days to have the adoption called off. She was later told that the adoption was canceled but not why.

Several former adoption workers, who spoke to the AP on condition of anonymity because of strict privacy restrictions surrounding adoptions, agreed that what Lee Chae-sik described strongly indicated an international adoption process, although there is a chance that it could have been donations from foreign sponsors looking to adopt. They say it was common for foreigners who were sponsoring a child through a donations program to eventually take steps to adopt the child.

Because of the loss of records, there’s no direct evidence to back the claims that adoptions were part of Brothers owner Park In-keun’s money-making operations. But experts and former workers say the Brothers owner wouldn’t have sent children for adoption unless he was getting more money than he got from keeping them at the compound, where he received government subsidies for each inmate and eventually could use them as slave labor.

South Korea’s adoption system put children at constant risk of trafficking, according to Lee Kyung-eun, a legal expert on transnational adoptions and former director of child policies at South Korea’s Ministry of Health and Welfare.

She said records will never show the real number of adoptions from Brothers, which came as adoption agencies fiercely competed for children, paying orphanages and hospitals for babies and pressuring unwed mothers and poor families to give away their children. Most adoptees were documented as abandoned, even in cases where they were simply lost or had known families. That made them easily adoptable and their roots often untraceable.

Records show that at least one agency that handled at least five of the adoptions that the AP found, Eastern Social Welfare Society, at the time called the Korea Christian Crusade, paid Brothers $10 a month for every child at the facility in 1972. Eastern president Kim Jin Sook, the daughter of founder Kim Duk Whang, responded with irritation when reached for comment and questioned why the AP was investigating a story that would harm South Korea’s image.

Park, the Brothers owner, died in 2016. The former No. 2 at the facility, Lim Young Soon, acknowledged that there had been some adoptions, without providing specifics.

South Korea’s Justice Ministry, which handles citizenship and immigration issues, refused to comment on adoptions from Brothers, saying that the facts haven’t been fully established.

An official from the Ministry of Health and Welfare who handles child welfare issues, Seong Chang-hyeon, said it would be difficult to thoroughly track down adoptions during the years of military dictatorship. It wasn’t until 2013 that South Korea required international adoptions of its children go through local family courts.

“The adoptions happened a long time ago, and there’s a limit to what you can find with just the records that remain now,” Seong said. “We do recognize that the children (at Brothers) were exposed to various kinds of human rights violations, not just adoptions.”

When contacted by the AP, the U.S.-based Holt International said it did not know whether any of its adoptees came from Brothers. However, a founding member of Holt confirmed before his death last year that Holt Children’s Services in Seoul placed children from Brothers for adoption.

In a later email, Cox wrote that Holt International contacted Holt Korea, which said its relationship with Brothers was limited to two children adopted by families in Europe. Like the other Korean agencies, Holt said it could not release further information without the consent of parties involved.

None verified adoptions from Brothers when approached by the AP. All but one refused to try, citing privacy issues or an inability to check old files. A spokesman for Catholic Social Services of Philadelphia said its files showed no mention of Brothers.

For Hwang, the North American adoptee, she said she “never really cared” about the “who, what, why, when, how” of her adoption. But now she is filled with questions, including, perhaps most importantly, whether her birth family willingly gave her up.

“I’m very curious about what the real story is for my first six years,” she said. “I have thought all my life that it was one thing, and now it’s changed.”  /muf