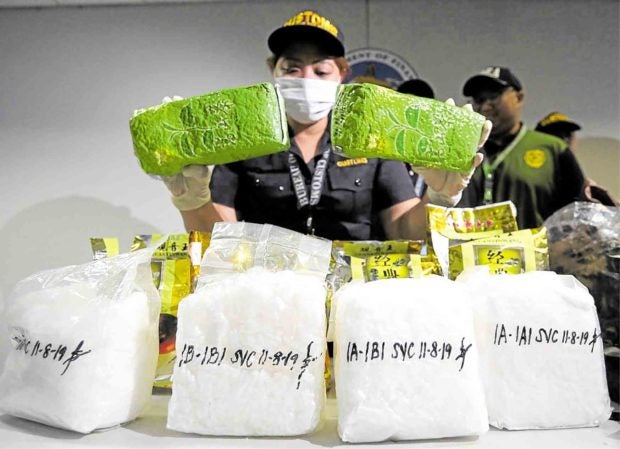 CONCEALED A Bureau of Customs agent shows the 6 kilograms of “shabu,” or crystal meth, found in the luggage of a Filipina passenger who arrived from Cambodia. —MARIANNE BERMUDEZ

Bureau of Customs (BOC) operatives at Ninoy Aquino International Airport Terminal 3 arrested on Friday a Filipino woman after 6 kilograms of “shabu” (crystal meth) worth P40.8 million was found in her luggage.

The suspect, Ruzol Marie Guillermo, 28, a resident of Marikina City, came from Siem Reap, Cambodia, via Cebu Pacific flight 5J-258. BOC Port of Manila collector Mimel Talusan said the suspect was arrested at 4 a.m. after the X-ray scan showed images of the suspected dangerous drugs inside two handbags placed in her backpack.

The suspect’s luggage was subjected to physical examination, during which five plastic packets of shabu, disguised as tea packs, were found. She was turned over to the Philippine Drug Enforcement Agency.—JEROME ANING