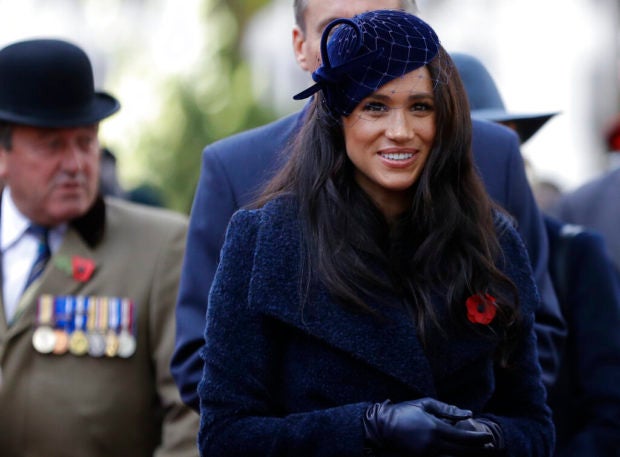 Prince Harry and Meghan Markle dropped by for coffee at a meet-up among families of deployed service personnel in Berkshire, United Kingdom, on Wednesday, Nov. 6.

The Duke and Duchess of Sussex have chosen to honor the military and their families for November, promoting organizations that support the armed forces on their Instagram account @sussexroyal. Pictures and a video from the surprise visit are also shared on the account.

Thank you from The Duke and Duchess of Sussex to all the military families they met with yesterday. For more details on this surprise visit, please see our previous post. #remembrance #lestweforget Photo ©️SussexRoyal/MOD

The royal couple went to the Broom Farm Community Center in Windsor, Berkshire, during a morning when the families regularly gather for coffee. The families have relatives from the Welsh Guards, Coldstream Guards and Household Cavalry.

Both Harry and Meghan waxed sentimental about their son Archie, who just turned 6 months old this week.

Amy Thompson, whose husband, Brad, is a Welsh guard, said that in conversing with the Duchess, she felt that Meghan was “just a normal mom and it was like talking to a friend.”

“My daughter Aeris is the same age as Archie and we talked about weaning and the children beginning to crawl,” she noted.

Harry sympathized with those deployed, telling those in the community, “It’s unbelievably hard. I have so much respect and admiration for anyone who has to deal with that.” He added that it is more difficult with children back home: “I can’t imagine what it’s like to miss so much as they change so quickly.”

READ: Prince Harry breaks down recalling how he felt being an expectant father

Meghan also bonded with 8-year-old Molly, whose mom, Leigh Smith, said they threw a party when the Duke and Duchess married.

Molly said, “Meghan promised not to tell anyone that I was off school. She asked me who my best friend was.”

Harry and Meghan’s warm interactions with the army families are shared in a video on their official Instagram account. They can be seen sitting on the floor and playing with babies.

Yesterday, The Duke and Duchess surprised their neighbours in Windsor at a coffee morning for military families in a community centre located in the heart of the Army housing estate. Every year during the month of November we pause to remember and honour all those who have served their country here in the UK, across the Commonwealth and around the world. Their Royal Highnesses also wanted to show support for the families of service personnel who are currently deployed overseas. As we lead up to Remembrance Sunday, The Duke and Duchess of Sussex will join Her Majesty The Queen and other Members of the Royal Family at various commemoration events, including the Festival of Remembrance at the Royal Albert Hall and the Cenotaph. During the visit yesterday, Their Royal Highnesses met with young families who shared their experiences as parents and as couples who are often apart from their loved ones for months at a time. A reminder that a life of service does not simply describe the person wearing the uniform, but the entire family. #Remembrance #Lestweforget

At one point, Meghan is captured talking to a child and stating, “Look at all your little teeth. Archie’s just got two teeth — two tiny ones right there.”

Harry served in the British army for 10 years. Remembrance Day, which is held every Nov. 11, is a memorial day that the Commonwealth member states observe in honor of members of the armed forces who have died in the line of duty.  Niña V. Guno /ra