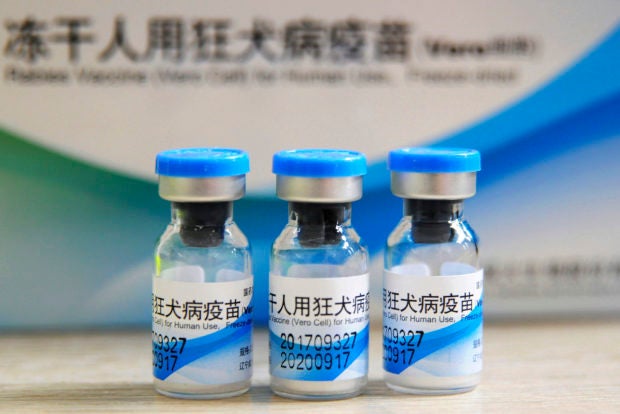 In this July 24, 2018, file photo, bottles of rabies vaccines made by Liaoning Chengda are seen at a Chinese Center for Disease Control and Prevention (CDC) station in Jiujiang in southern China’s Jiangxi province. Changchun Changsheng Life Sciences Ltd., a Chinese maker of rabies vaccine, that was fined 9.1 billion yuan ($1.3 billion) in a product quality scandal that set off a crackdown on the industry said Friday, Nov. 8, 2019, it has been declared bankrupt. (Chinatopix via AP, File)

BEIJING — A Chinese maker of rabies vaccine that was fined 9.1 billion yuan or around $1.3 billion in a quality scandal that set off a crackdown on the industry said Friday that it has been declared bankrupt.

Changchun Changsheng Life Sciences Ltd., which lost its production licenses last year, said in a statement that a court issued the ruling after concluding the company was insolvent and couldn’t pay its debts.

Revelations that authorities failed to act immediately after finding the company might have falsified production records led to an outcry among a public already upset over deaths and injuries due to fake or shoddy medicines, milk, toys, and other products.

Changsheng Life Sciences used expired materials, mixed different batches of products, and failed to test them properly, according to regulators. The company destroyed records to conceal its misconduct, they said.

No injuries were reported but authorities recalled the company’s products from China and foreign markets.

Rabies is endemic in parts of China. /kga