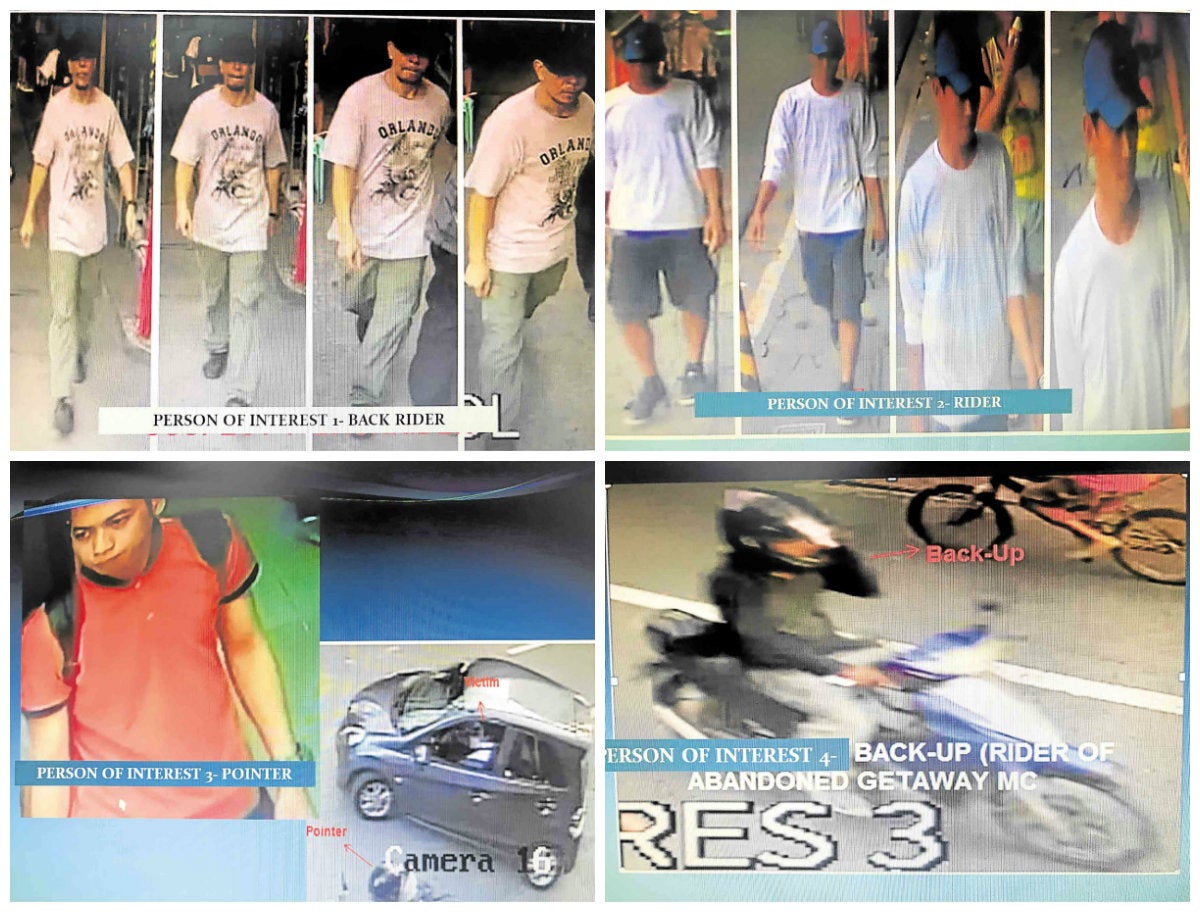 HAVE YOU SEEN THESE MEN? The police have asked the public to help them identify four men linked to the killing of senior labor officer Helen Dacanay in Malate, Manila, on Nov. 4. —PHOTOS COURTESY OF MANILA POLICE DISTRICT

Police investigators released on Thursday photos of the four persons of interests in the killing of a senior labor officer earlier this week.

Helen Dacanay, 59, who was assigned at the Department of Labor and Employment’s (Dole) Manila field office on Gen. Malvar Street in Malate, was shot by two men on a motorcycle as she was driving her car at 4:41 p.m. on Monday. She had just left work when she was ambushed.

Dacanay was declared dead on arrival at the Ospital ng Maynila, while her companion, labor arbiter Agatha Ann Daquigan, was unhurt.

During a press conference, Manila Police District (MPD) chief Police Brig. Gen. Bernabe Balba said the four persons of interest consisted of two armed men, a third man who helped identify the victim’s vehicle and a fourth man who drove the motorcycle used by the gunmen after they transferred to a tricycle.

After reviewing footage taken by 50 closed-circuit television cameras, MPD investigators were able to piece together the four men’s movements before the shooting.

The man who had identified Dacanay’s vehicle was spotted at the Dole office two hours before the shooting. He followed the victim on a motorcycle when she left the building at 4:38 p.m. Before reaching the corner of Singalong Street, Dacanay’s car was stopped by two men on foot who peppered the driver’s side with bullets.

The gunmen then fled to San Andres and Anak Bayan Streets on a motorcycle before abandoning it and getting on a tricycle. Another man wearing a helmet then drove the abandoned motorcycle.

National Capital Region Police Office chief Police Brig. Gen. Debold Sinas said that the persons of interest would be tagged as suspects once their identities had been confirmed. The motive, however, remained under investigation.

“Right now, there’s a separate team reviewing the documents that are being shared by Dole. We’re after the identities of the shooters first because when we catch the suspects, they might reveal who hired them,” Sinas said.

According to the victim’s family, Dacanay did not receive any death threat before she was ambushed.

Moises Pagaduan, Dole security chief, said there were no reports of irregularities involving Dacanay who worked at Dole for almost 30 years.