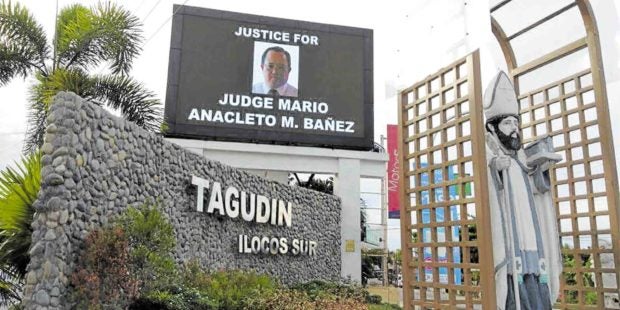 The Supreme Court wants its version of the United States Marshals Service to provide security for judges and court personnel, after the murder on Tuesday of Ilocos Sur Judge Mario Anacleto Bañez in San Fernando City in La Union province.

Chief Justice Diosdado Peralta would ask Congress to pass a law creating a “security system” for magistrates and court personnel patterned after the US Marshals Service, the high court said in a statement.

Peralta believed that the security service should be created through legislation “to prevent its powers and authority from being questioned,” the court said.

“This security system would have the objective of law enforcement, which is primarily connected to judicial functions such as the security of magistrates and court personnel, enforcement of court orders, safekeeping of evidence and also investigation,” it said.

“Considering the intended functions of the proposed security system, it would be best that this office or law enforcement agency be created through a law in order to prevent its powers and authority from being questioned, as it will now be clearly based on legislation.”

Designated by law to serve as the law enforcement arm of US federal courts, marshals protect the judiciary, arrest fugitives, transport prisoners, operate the witness security program and manage the seized assets illegally acquired by criminals.

Peralta proposed the adoption of the scheme after Bañez, presiding judge of the Regional Trial Court (RTC) Branch 25 in Tagudin town, Ilocos Sur, was shot and killed by two men as he was driving home to San Fernando City.

Bañez died before reaching the hospital.

Policemen were deployed to secure Bañez’s family in San Fernando, according to Police Lt. Col. Percival Pineda, the officer in charge of the city police.

Pineda said the police were on tight patrol around Bañez’s house in Barangay Dalanguyan as the special task force investigating the killing was looking into work-related motives behind the attack.

Bañez’s remains were taken to the RTC in Ilocos Sur for a necrological service on Thursday. The wake would be held at the family’s home in San Fernando.

Citing information from Bañez’s family members, Pineda said the judge did not receive death threats. “But it’s also possible that Bañez did not tell his family that he had death threats,” he said.

On Sept. 4, Bañez acquitted Ibaloy activist Rachel Mariano of murder and frustrated murder charges filed by the military against her.

Mariano stood trial for allegedly killing a soldier and wounding several others in a supposed encounter between New People’s Army rebels and government troops in Quirino town, Ilocos Sur, in October 2017.

Bañez was the 31st judge slain since 1999, according to the Philippine Judges Association, which renewed its call on authorities to be “more vigilant in securing and protecting” magistrates.