Juvenal Azurin, regional director of Philippine Drug Enforcement Agency (PDEA) in the Bangsamoro, said Samrod Mamasainged Damada alias “Sam” and Nordin Datala, both residents of Barangay Poblacion 2, were arrested at past noon on Nov. 7, along the national highway in Poblacion 2. 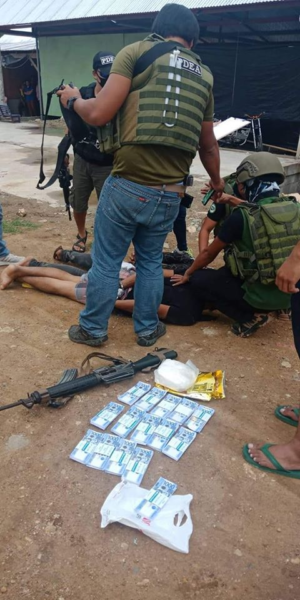 Azurin said Damada and Datala, who had been placed under surveillance for more than a month, agreed to sell a kilo of suspected shabu to an undercover agent.

Seized from the suspects were a tea bag that contained one kilo of suspected shabu, a P1,000 bill, an M-16 AR-15 rifle with 90 rounds of ammunition, and a Suzuki multi-carry vehicle without a license plate.

Azurin said the suspects belonged to an organized drug ring operating in Maguindanao and Sultan Kudarat. They are now detained at the PDEA Bangsamoro custodial facility in Cotabato City.

They will be charged with violation of the Comprehensive Dangerous Drugs Act of 2000 and illegal possession of firearms./lzb