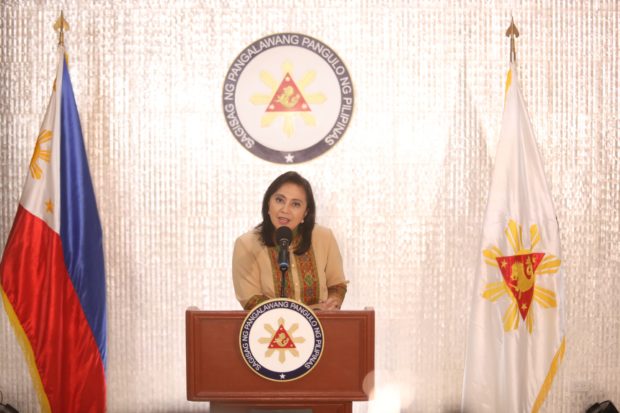 Vice President Leni Robredo addressed the media on Wednesday, Nov. 6, 2019, to announce that she is accepting the designation to lead the anti-illegal drug campaign. Photo by OVP

Hontiveros issued this response to an earlier remark by Senator Ronald “Bato” dela Rosa, where he reminded Robredo that the drug war is not a beauty contest and that playing cute will not work.

(Well, who’s playing cute here? Who’s joining a beauty contest? I don’t see anyone doing that in this situation. VP Leni has never prettified the very ugly face of this war on drugs. In fact, many have already died in this drug war).

“The highest account I read (is) 27,000 and all small-time suspected users and pushers.
She (Robredo) is not joining any contest as I said I believe she is ready to lead and we’ll see that in the coming days,” she added.

Data from the Philippine Drug Enforcement Agency (PDEA) showed that over 5,000 drug suspects were killed in anti-drug operations from July 2016 to June 2019.

But human rights groups claim that there had already been 27,000 killings related to the administration’s anti-drug campaign.

Hontiveros also reacted to the claim made by Senator Christopher “Bong” Go, the closest ally of President Rodrigo Duterte in the Senate.

Go alleged that Robredo may “baby” the drug lords once  she takes on her new role in the drug war.

(It looks like it’s some other high official who lacked and it is not VP Leni).

Asked to identify who she was referring to, Hontiveros just said the official “happens to be very close to my colleague in the Senate.”

On Wednesday, Vice President Leni Robredo accepted the position as co-chairperson of the Inter-Agency Committee on Anti-Illegal Drugs (ICAD).

Hontiveros welcomed this and called on law enforcement agencies that make up the anti-drug body “to support her (Robredo) and follow her lead because she is ready to lead she even said she’s ready to sacrifice for the people.”

The senator said that if the PDEA, the Philippine National Police (PNP), and the Dangerous Drugs Board (DDB) would follow Robredo’s lead, she would be able to put an end to the killings, hold abusive officials accountable and interdict smuggled shabu in the country’s ports.

“She will be able to give the full support to the Department of Health (DOH) for more community based and outpatient treatment and rehab programs, a public health approach to problematic drug use,” she added.

“She will be able to work with the Department of Justice in unclogging our courts and our jails of cases and imprisonments of suspected small-time drug users and pushers,” she further said.

Hontiveros also said she “firmly believe(s)” that Robredo “can do a much better job than has been done so far for the past three years on addressing our drug problem.”

“If she’s given full freedom, powers and the resources she will be able to bring an effective and humane solution to this problem,” she added.  /muf