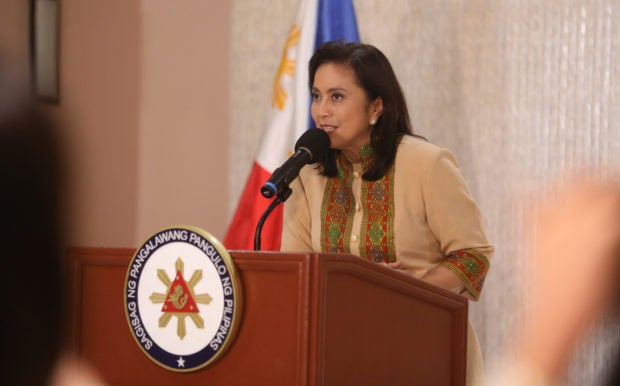 Vice President Leni Robredo addressed the media on Wednesday, Nov. 6, 2019, to announce that she was accepting the designation for her to lead the anti-illegal drug campaign. (Photo from the Office of the Vice President)

MANILA, Philippines – The Liberal Party (LP) supports Vice President Leni Robredo’s decision to accept the offer to head the Inter-Agency Committee on Anti-Illegal Drugs (ICAD), despite its earlier pronouncements against the offer.

“Yes, the Liberal Party supports her decision,” Tañada told INQUIRER.net in a message, after being asked if LP would back Robredo’s new task.

“Mr. President, now that VP Leni has accepted your offer despite the risks involved, I hope all the agencies involved in the anti-illegal drugs campaign be transparent and share information with her,” he added.

Robredo is the chairman of LP, an opposition party.

Earlier, Tañada said that Robredo would not accept a drug war hinged on killing people, especially the innocent ones.

But aside from him, other allies — like former Sen. Antonio Trillanes and Albay 5th District Rep. Edcel Lagman — discouraged the Vice President from accepting the post, saying that it could be a trap for her.

“Why would VP Leni accept an offer if what the government wants is to keep on killing people?)” Tañada, speaking in Filipino, said on Wednesday morning.

READ: Duterte move hit: Robredo ‘being set up to fail’

Earlier, the Vice President accepted the proposal from President Rodrigo Duterte, as she claimed to have considered the possibility of saving the lives of innocent victims targeted in the drug war.

Since President Rodrigo Duterte assumed office in 2016, official government numbers showed that more than 5,500 drug suspects had been killed in legitimate police operations. However, administration critics said that the true death toll may be from 11,000 to 30,000.

Robredo also dared officials who have doubted her abilities, asking them if they are prepared to be working with her. For his part, Tañada said that this would be a test of transparency for the Duterte administration.

“How can she recommend policies if information is not shared with her? This is the test,” he noted.

Robredo to gov’t after accepting anti-drug post: Are you ready for me