Duterte move hit: Robredo ‘being set up to fail’ 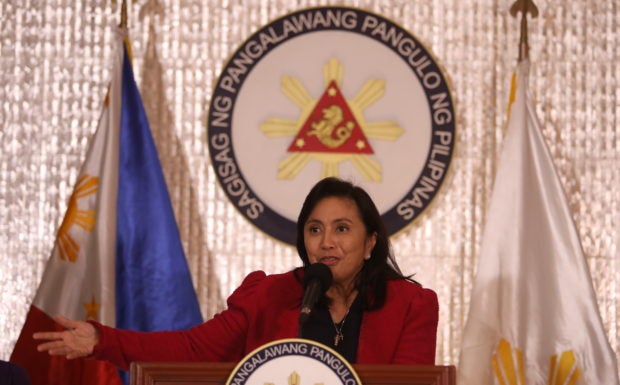 MANILA, Philippines — President Rodrigo Duterte has appointed Vice President Leni Robredo as co-chair of an interagency committee against narcotics, but a spokesperson for the country’s No. 2 says the vice presidency does not see the offer as serious because the position is nonexistent.

A member of Robredo’s Liberal Party said on Tuesday that the Vice President was “being set up to fail” with her appointment as cochair of the Inter-Agency Committee on Anti-Illegal Drugs.

Hours after Malacañang announced Robredo’s appointment, her spokesperson, Barry Gutierrez, said the Vice President had not yet accepted her appointment.

“How can we accept the position when it is meaningless? If you look at the executive order creating the [committee], the co-chair post is nonexistent,” Gutierrez told a news conference on Tuesday evening.

But he did not say whether Robredo would accept or reject the appointment.

He said Robredo would “directly communicate” with the President on Wednesday to list down her comments and suggestions to help the government’s war on drugs.

“At this point, the talk is not whether she accepts or not. She has not asked for an appointment. This position is nonexistent and has no power,” Gutierrez said.

Presidential spokesperson Salvador Panelo said Gutierrez was wrong. He said President Duterte had the “continuing authority to reorganize the bureaucracy” so there was no need to amend the executive order to create a position for Robredo on the interagency committee.

Last week, Gutierrez said the President’s talk of offering Robredo the job of leading the war on drugs was to make her a scapegoat for the shortcomings of his campaign against narcotics.

Albay Rep. Edcel Lagman issued a statement on Tuesday pointing out that the co-chairmanship of the interagency committee was “vastly different” from the President’s original offer to her to be his drug czar.

“The diluted position validates the fear that the Vice President is being set up to fail,” Lagman said.

He cited the prediction of Philippine Drug Enforcement Agency chief Aaron Aquino, the chair of the committee, that Robredo would fail as leader of the war on drugs.

“The Vice President is being thrown into a composite … committee with no less than 20 agencies as members,” said Lagman, a member of Robredo’s Liberal Party.

“As co-chair of [the committee], the Vice President, before she could act, will have to contend with the chair and the multiple [members of the body],” he said.

The appointment came after Robredo made critical remarks during an interview with Reuters last month and in subsequent media appearances, which angered President Duterte and prompted a torrent of fury by his supporters aimed at the Vice President, who has no role in his administration.

But Panelo said on Tuesday that the decision to make Robredo cochair of the interagency committee was genuine and not a cynical move to discredit her.

President Duterte signed Robredo’s appointment on Oct. 31, a day before he flew to Thailand for the 35th Association of Southeast Asian Nations Summit, the Palace said.

It said Executive Secretary Salvador Medialdea transmitted the appointment letter to the Office of the Vice President.

Panelo said Robredo’s new role carried Cabinet rank and that she was welcome to attend the Cabinet meeting on Thursday.

He added that the pres’s formal offer should make detractors see the President’s sincerity in giving the job to Robredo.

The President’s “ultimate motivation,” he said, was the good of the people, with the hope that the government succeed in combating illegal drugs “regardless of who contributed to [the] success.”

Medialdea said Robredo would have a “proactive role” in the war on drugs.

“She will have a hand in crafting the policies and programs of the government and at the same time ensure the proper implementation of anti-illegal drug operations and advocacy initiatives,” he said.

Panelo described the Vice President as “bright enough to take on the job.”

“She’s a lawyer … She can do it if she so desires,” he said in a television interview.

“The moment she accepts it, she will be giving directives to the agencies under her, not the President directing. The President has appointed her and it’s now her call whatever she wants to do with it,” Panelo said.

And if she declines her appointment?

“Then nothing will happen,” Panelo said. “It will mean that all of her criticisms are false.”

The war on drugs, the President’s signature policy, has caused an international outcry because of the thousands of people killed in what human rights groups say are systematic executions and cover-ups by police.

The Philippine National Police rejects that.

Robredo on Oct. 23 told Reuters the crackdown had overwhelmingly targeted the poor and police were being allowed to abuse their power.

She said international help, including from the United Nations and the International Criminal Court, should be sought if the government refused to change tack.

Too many people have been killed, with no evidence of a decline in the supply or use of drugs, she said.

“We ask ourselves, ‘Why is this still happening?’ The President has already made very serious threats to drug syndicates, to drug lords … and yet it’s still very prevalent, so obviously, it’s not working,” Robredo said.

Panelo said the President had directed all agencies to support Robredo.

“If she has been criticizing the drug war as ineffective, then there must be ideas on her mind to make it effective,” he said in another television interview.

Should she succeed, Robredo’s new job is a “ladder to the presidency,” Panelo said.

He recalled that in the early 1990s, President Fidel Ramos appointed his Vice President, Joseph Estrada, chair of the Presidential Anti-Crime Commission. Estrada went on to become President.

“This is her chance. This is her moment. She should accept it,” Panelo said.

The President’s allies in the Senate challenged Robredo to accept her appointment.

“I challenge (Robredo) to accept the job … so she will be able to understand the job of a President. Let’s see if she can still sleep at night,” Sen. Bong Go said.

Asked what he meant, Go said he was referring to the difficulties of leading the war on drugs.

“She should try to kill all the drug lords … If she will not succeed, I will ask her on July 1 (2022) why she failed to kill the drug lords,” Go said. “But I want her to succeed. For the interest of the Filipino people, I will support her.”

Senate President Vicente Sotto III said Robredo should accept the job so she would see why the war on drugs “should not be stopped.”

“‘Instead of criticizing, help us.’ I think that’s the message of the President [in appointing Robredo],” Sotto said.

In the House of Representatives, Ako Bicol Rep. Alfredo Garbin Jr. said Robredo’s appointment could be the “bridge” to a reconciliation between the Duterte administration and the political opposition.

“We believe that the Vice President would be able to contribute significantly [to] the government’s war [on] drugs. Likewise, we see this appointment as a positive step toward reconciliation between the current administration and the opposition,” Garbin said.

Anakalusugan Rep. Michael Defensor said Robredo should accept the job so she would have “full grasp” of the drug situation and a chance to “assert her position” on how to handle the campaign against narcotics. —Reports from Patricia Denise M. Chiu, DJ Yap, Julie M. Aurelio, Marlon Ramos and the wires