BEIJING  – China’s defense minister defended his country’s policy on the controversial issues of Hong Kong and the northwestern territory of Xinjiang in a telephone conversation with his U.S. counterpart. 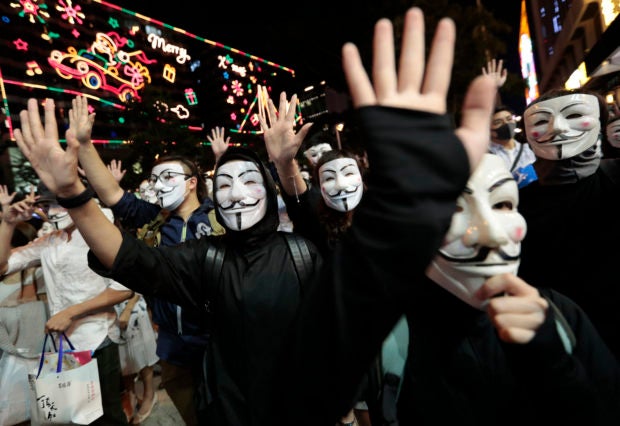 Protesters in Guy Fawkes masks raise their hands as they chant slogans during a rally in Hong Kong, Tuesday, Nov. 5, 2019. Hong Kong’s embattled leader, Carrie Lam, said Tuesday that she has received the backing of Chinese President Xi Jinping in her handling of five months of anti-government protests that have rocked the semi-autonomous Chinese territory. (AP Photo/Dita Alangkara)

While it’s usual for China to reassert its claim to sovereignty over both those areas in talks with the U.S., the mention of Hong Kong and Xinjiang is more unusual.

Semi-autonomous Hong Kong has been wracked by five months of anti-government protests that Beijing accuses the U.S. and other foreign forces of encouraging.

Meanwhile, China has come under criticism for detaining more than 1 million members of Xinjiang’s native Uighurs and members of other Muslim ethnic groups in political re-education centers where they are forced to swear loyalty to the ruling Communist Party. The centers are seen by critics as a key part of what they call a campaign of cultural genocide.

China at first denied the existence of the centers, but now says they aim to provide jobs skills to lift Uighurs and others out of poverty and combat religious extremism.

No details of Wei’s comments on any of the four topics were given, although he has issued a series of harsh statements renewing China’s determination to back up its territorial claims with force.

Wei did not direct the threat at the U.S. but loaded his address with criticism of activities by Washington, including support for Taiwan and leading so-called freedom of navigation operations in the strategic waterways that China virtually claims as its own.

Wei said the People’s Liberation Army would not “yield a single inch of the country’s sacred land.”

China’s Communist Party maintains that Taiwan is part of China, and has used increasingly aggressive rhetoric toward the democratic island, which split from the mainland amid a civil war 70 years ago.

In the South China Sea, China is pitted against smaller Southeast Asian neighbors in multiple disputes over island reefs, corals and lagoons amid some of the world’s busiest shipping lanes.

It has constructed seven artificial island outposts equipped with airstrips, radar and missile stations that have been repeatedly criticized by the U.S. as a source of increased tension in the area.

Despite Wei’s hard-line stance, Xinhua reported he told Esper Tuesday that while China-U.S. relations had reached a “crucial period,” mutually beneficial cooperation was the “only correct choice.”

“The two sides should … continue to advance military-to-military relations to make them a pillar of stability in bilateral relations,” Wei was quoted as saying. /gsg