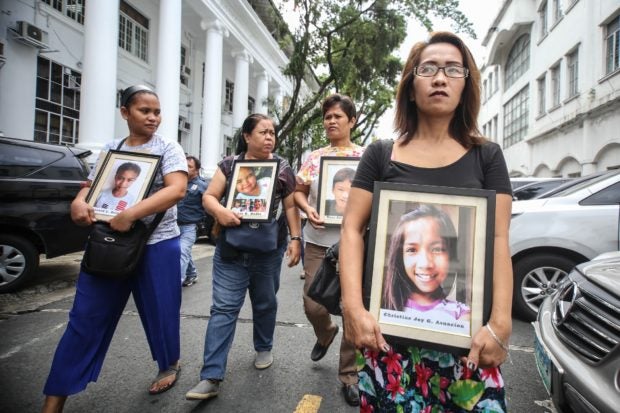 GRIEF AND JUSTICE Relatives of children whose deaths were being linked to the Dengvaxia vaccine rally on Oct. 15, 2018, at the Department of Justice demanding the prosecution of officials involved in the Dengvaxia scandal.—INQUIRER PHOTO

To date, Acosta said PAO has filed 50 complaints before the DOJ. The number represents 50 persons, mostly children out of 147 who died after receiving the anti-dengue Dengvaxia vaccine. The 147 dead victims were examined by the PAO forensics team.

[We will continue to file cases. This Friday, we will be filing more cases.]

Acosta was at the DOJ to attend the preliminary investigation on one of the batches of complaints that they have filed. The case involved 12 dead victims and one 11- year-old Mark Joseph Estandarte who received one shot of Dengvaxia in 2017.

Under the complaints, the respondents, who included Iloilo First District Rep. Janette Garin and Health Secretary Francisco Duque III, were accused of reckless imprudence resulting in homicide under Article 365 of the Revised Penal Code; torture resulting in the death of a person and torture committed against children under Republic Act 9745, the Anti-Torture Act of 2009; and for violating RA 7394, the Consumer Act of the Philippines, particularly, the mislabeling of drugs and devices, liability for defective products, and liability for product and service imperfection.

The DOJ has already found probable cause to indict those named as respondents in the first batch of complaints filed by PAO while the second and third batches of complaints have already been submitted for resolution.