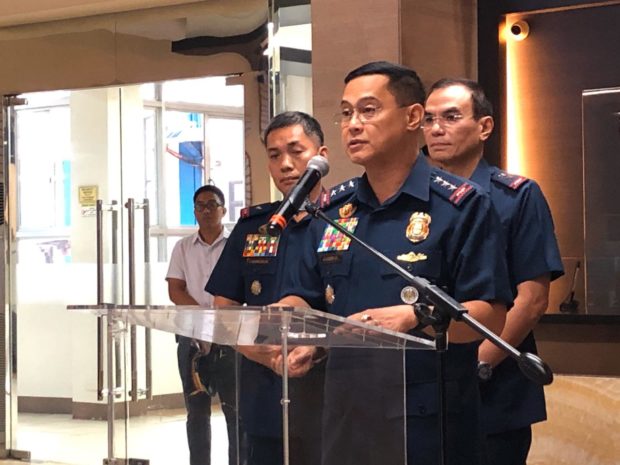 MANILA, Philippines — The Philippine National Police (PNP) vowed on Monday to prove that the activists arrested in simultaneous raids in Bacolod City, Negros Occidental are supporting the communist insurgency in the country.

Lt. Gen. Archie Gamboa, officer-in-charge of the PNP, said the 40 personalities arrested on October 31 should first answer to charges of illegal possession of firearms and explosives against them.

“Later on, we are starting to build up cases to prove to them that they are supporting the CPP-NPA (Communist Party of the Philippines-New People’s Army),” he said in a press briefing at Camp Crame.

Gamboa then lamented how some non-government organizations supposedly act as humanitarian groups but actually support the communist insurgency.

“Kaya ito nagkaganito sa Republika eh (That’s why this happened to the Republic). Some of the other NGOs na kunwari humanitarian sila (pretend they are humanitarian) but they are doing otherwise. Now they are starting to feel and get hurt on the campaign of government to end the local communist terrorists, and they will continue to do so unless they stop,” he said.

Gamboa said 40 persons, whom he described as “ranking CPP-NPA-NDF (National Democratic Front) personalities,” were arrested while 14 “child warriors” were rescued in the simultaneous raids.

Those arrested were from offices of Bagong Alyansang Makabayan (Bayan), Kilusang Mayo Uno (KMU), Anakpawis, and Gabriela in Barangay Bata, as well the National Federation of Sugarcane Workers (NFSW) office in Barangay Taculing, and at a house in Barangay 33.

The military earlier said the minors, aged 12 to 17, are being trained as “rebel-warriors,” while the local police said the premises were being used for combat training and indoctrination of minors.

Rights and progressive groups, however, called the arrests a crackdown against activists. They also noted that the firearms and explosives recovered from the suspects are planted by the military and the police that launched the operation.

But for Gamboa, this accusation against state forces is common.

“Let them prove themselves in court if they say that this is planted,” he said. /je