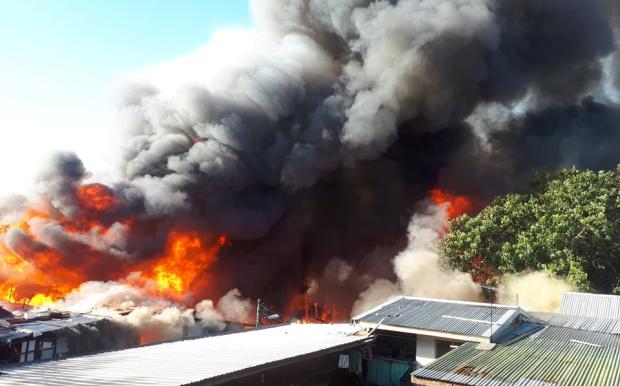 No one was reported hurt in this fire that broke out in Barangay San Roque in downtown Cebu City on Sunday, Nov. 3, 2019. (Contributed photo)

CEBU CITY, Cebu, Philippines – At least 80 houses and a three-story building were destroyed by a fire in Sitio Panting, Barangay San Roque in downtown Cebu City on Sunday afternoon.

The Bureau of Fire Protection in Cebu City received the alarm at around 2 p.m.

No one was reported hurt in the fire.

As of 8:30 p.m., firefighters were conducting an overhauling operation to completely put out the blaze, according to Senior Fire Officer 1 Peter Caburnay.

Among those destroyed by the fire was the Yau Building.

Eric Yau, one of the owners of the building, said the three-story structure had a warehouse on the ground floor and rooms for rent on the second and third floors.

More than 100 affected families were housed at the San Roque gymnasium.

Read Next
Man nabbed for making bomb joke at Davao airport
EDITORS' PICK
A delightful blessing!
Gov’t plans to open COVID-19 vaccination for 5- to 11-yr-olds by January 2022
Gov’t eyeing COVID-19 vaccine booster for essential workers, indigents by Dec. 10
Villar Group gears up for AllValue Shopping Party on Dec. 3; around P 1-million promos and discounts up for grabs
Omicron variant detected in more countries as scientists race to find answers
Legarda: Ending Violence Against Women, a cause for all
MOST READ
Omicron poses ‘very high’ global risk, countries must prepare–WHO
Quiboloy warns of ‘much worse than Omicron virus’ if his ‘persecution’ is not stopped
Bongbong Marcos’ conviction in tax case not a crime involving moral turpitude — lawyer
Marcoleta defends pol ads on ABS-CBN
Don't miss out on the latest news and information.