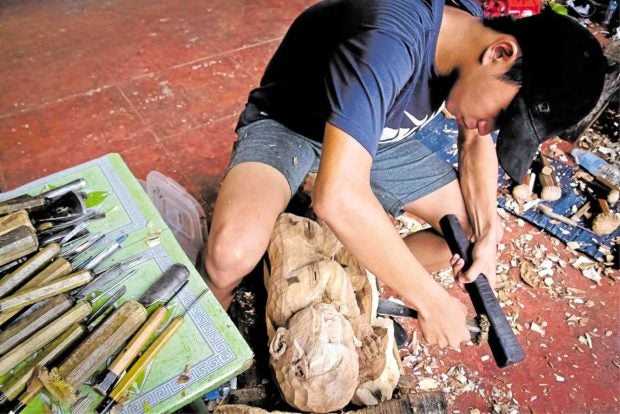 CHIPPING AWAY Neil Ricci Bagamano works on his piece during an on-the-spot wood carving competition.KIMMY BARAOIDAN

PAETE, Laguna, Philippines — Wood carving may be perceived by many as an old man’s craft, but in this town, known as the “carving capital of the Philippines,” three young wood carvers are keeping the tradition alive.

They took to their benches at the town plaza and showed their skills during an on-the-spot wood carving competition for nonprofessionals 25 years old and below that was organized by the municipal government’s tourism, culture and arts unit, and the Banhay Kulay Paete Artist Guild as part of the recent Ukit-Taka Festival.

Clyde Mari Baldemor, 21, won first place with his piece, “Adan sa Loob ng Puno,” which shows a face of a man inside a tree bark.

Baldemor, who works with clay, Styrofoam and prosthetics at a television network, is a descendant of the Baldemors, a well-known family of wood carvers. He has been wood carving since he was 14.

Second placer Neil Ricci Bagamano was the youngest among the three.

The 17-year-old, who has been wood carving for a year now, is an apprentice of carver Luisito Ac-ac. Bagamano’s piece, “Kandungan ng Magulang,” shows a baby being cradled by two hands, which, he said, symbolizes loving and caring for the youth.

Mark Gercie Cadapan, 25, was not fazed despite placing last. After all, it was his first time to work on wood during the competition, as his medium really is fruit, which he started doing in 2015.

He said that, compared with fruits, working with wood was much harder.

He even experienced a mishap while working on his piece “Tarantula” — one of the spider’s legs broke when he accidentally leaned on it. But he remedied it by nailing the broken piece in place.

The contestants worked from morning until afternoon, chipping away at the acacia slabs that the local government provided.

There was also a wood carving display competition, where professionals and nonprofessionals 26 years old and above prepared wooden pieces ahead of time.

While Paete is known for its religious wooden statues, religious themes were excluded from both on-the-spot and display categories.

According to Joel Baretto, the town’s tourism officer in charge, this was to give the carvers more artistic freedom and a chance for them to create what they really had in mind.

This year’s and the previous year’s display competition pieces — lined up on long wooden tables behind where Baldemor, Bagamano and Cadapan were working — were a combination of traditional and modernist themes, which included realistic humans and animals, impressionistic human figures and intricate scenes.

The impressionistic piece, “Buntis Ako” by Edward Dave, which shows a pregnant woman with a long neck, copped the top place.

Bagamano, Baldemor and Cadapan believe that wood carving has fallen out of favor among the youth, despite it being taught in public schools.

Baretto said wood carving had already been in the public school curriculum for many years. “When I was in elementary, we already had wood carving in the curriculum,” he said.

Elementary students start with clay and then move on to soap in high school. When they reach senior high, that’s when they handle wood, he said, adding that senior high school students are sent to workshops of local wood carvers like Ac-ac for apprenticeship.

“That way, when they go on to college, they won’t forget wood carving,” Baretto said.

Aside from the waning interest in wood carving, locals are also finding work abroad and on cruise ships, carving fruits, vegetables and ice for higher pay.

“Almost 60 percent of the locals are in luxury liners and five-star hotels around the world,” Baretto said. “The selling price here is going down. That’s why the locals are going abroad, to Manila, or cruise ships.”

Cadapan also has plans to work abroad after his term as village youth officer expires in 2023. Baldemor, on the other hand, is staying because he has his own shop. Bagamano said he might continue wood carving once he finished school.

A recent survey conducted by the local government listed more than a hundred wood carvers in the town. Baretto said he was confident that the craft won’t die just yet.