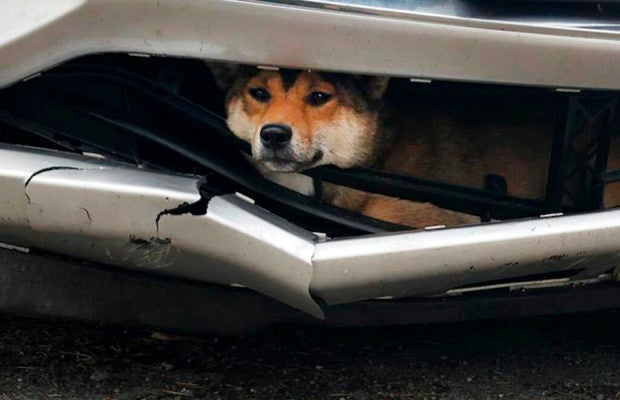 Coco, a Shiba Inu, is trapped inside the bumper of a car.Image: Rotterdam Police Department via AP

ROTTERDAM, N.Y. — A dog hit by a car in upstate New York rode for 45 minutes wedged between the broken bumper and the grille before the driver realized she was carrying an injured passenger.

Coco the Shiba Inu was being treated for a fractured elbow after being struck Monday morning in Albany.

Rotterdam Police Lt. Jeffrey Collins says the driver knew she hit something and noticed the car’s damage but didn’t see the dog at first. She drove about 15 miles (25 kilometers) to Rotterdam before hearing noises and stopping to recheck her car’s front end. She called 911 after she saw the dog gazing from below the license plate.

A Schenectady veterinary clinic worker told WNYT-TV that 16-pound (7-kilogram) Coco “fit perfectly” in the space behind the bumper and was lucky to be alive. NVG