Woman found dead with python around neck in US snake house 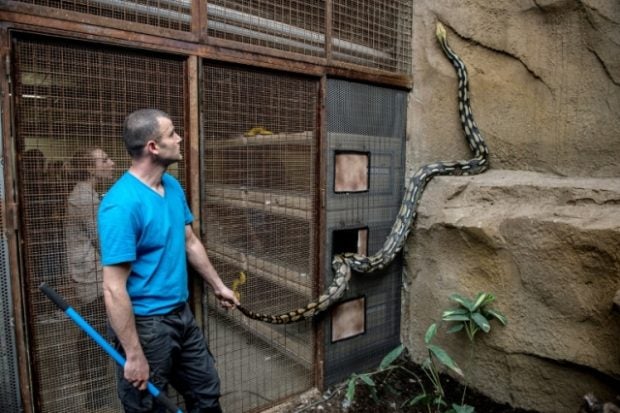 Pythons like this specimen pictured in France are a non-venomous family of snakes found in Africa, Asia and Australia that encompasses more than 30 species, including some of the largest snakes in the world. Image: JEAN-PHILIPPE KSIAZEK – AFP/File

A 36-year-old woman has been found dead with a python wrapped around her neck in a home in the midwestern U.S. state of Indiana which housed around 140 snakes, police said.

The body of Laura Hurst was discovered on Wednesday in the house in Oxford, Sergeant Kim Riley, a state police spokesman, said in a statement.

Hurst, of Battle Ground, Indiana, had an eight-foot (2.4-meter) reticulated python wrapped around her neck.

Medics attempted to revive her but their efforts were unsuccessful.

“She appears to have been strangled by the snake,” Riley told the Lafayette Journal & Courier newspaper. “We do not know that for a fact until after the autopsy.”

The home with the snake collection was owned by the Benton County sheriff, Don Munson, who lived next door, the Journal & Courier said, and Hurst kept about 20 of her own snakes there.

Munson, who found Hurst’s body, told the newspaper that her death appeared to be a “tragic accident.”

Pythons are a non-venomous family of snakes found in Africa, Asia, and Australia that encompasses more than 30 species, including some of the largest snakes in the world.

They typically grasp prey with sharp, backward-curving teeth before squeezing them tightly to induce a heart attack. NVG

Snake on a plane: Python flies to Scotland by hiding in woman’s shoe

Woman’s butt gets bitten by python while using toilet