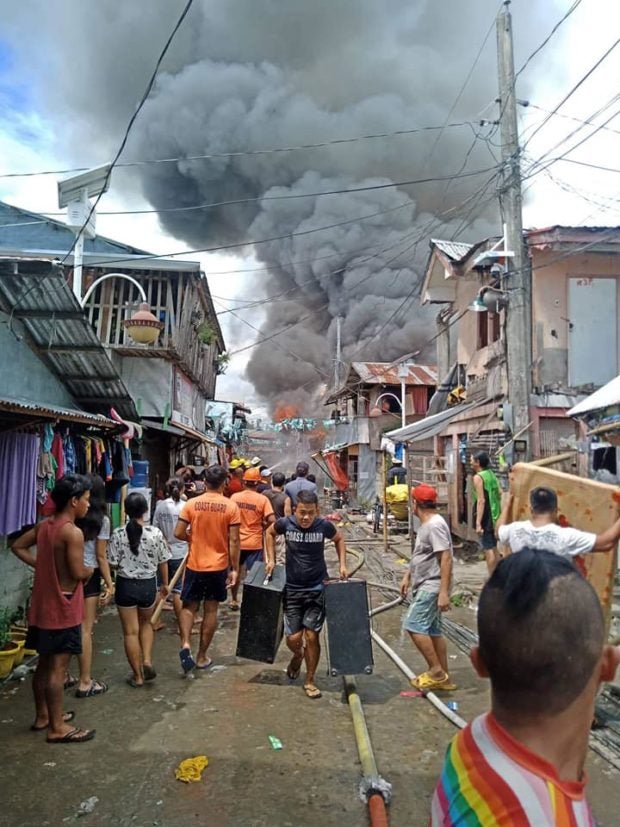 A resident scampers to save his belongings in the fire that hit urban poor village in the city’s port area on Saturday morning. photo by Joey A. Gabieta, Inquirer Visayas

TACLOBAN CITY –– Fourteen people were hurt in a fire that gobbled 35 houses in one of the city’s urban poor areas here on Saturday.

Most of those hurt suffered lacerations and minor burns while scampering to save their belongings when the fire broke out at 11:10 a.m. at the seawall area in Barangay 37.

One of them was Aldren Ocado, 25, who suffered first-degree burns and was treated by medical staff from the City Health Office.

Rosanna Galangue, 45, said she was cleaning their house when she heard screams that fire hit their village.

“I immediately grabbed my daughter Riza Mae and ran outside the house,” she said.

Olive Solayao said she was preparing to visit their departed loved ones at the city’s public cemetery when the fire broke out.

“We hurriedly left our house with just our clothes on,” the 41-year-old mother said.

FO3 Jonald Lace, City Fire Office investigator, said the fire of still unknown origin broke out from the two-story house owned by Regina Orgena, which was being used as a boarding house.

The fire immediately spread to 35 houses since these were made mostly of light materials and that the wind was also strong at that time, he added.

The area is located within the city’s port area.

Village councilor Cris Abadines said that based on accounts of residents, the fire might have been started by a rice cooker left unattended by Rez Abuya and Marvin
Lucas, who rented a room in Orgena’s house.

Lace said Abuya and Lucas denied using a rice cooker when they left the boarding house around 6 a.m.

Affected residents, in the meantime, were housed at the barangay hall and were provided food packs by the City Social and Development Office.