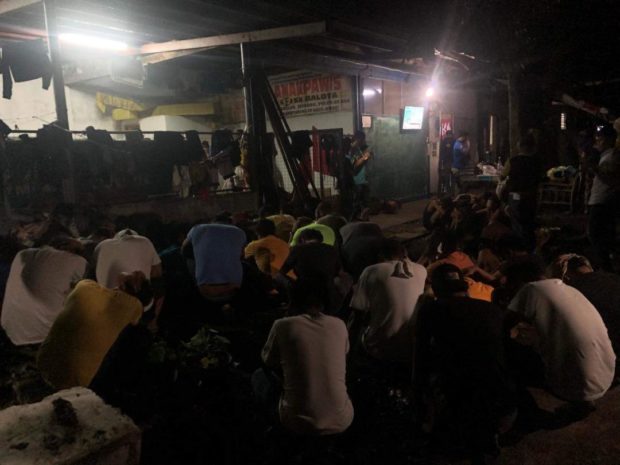 At least 50 persons were rounded up by joint military and police forces during simultaneous raids on offices of progressive groups in Bacolod City on Thursday afternoon. (CONTRIBUTED PHOTO)

BACOLOD CITY — At least 57 persons, including 14 minors, were rounded up by joint military and police forces during simultaneous raids on offices of five progressive groups in the cities of Bacolod and Escalante since Thursday afternoon.

Armed with search warrants issued by a Quezon City court, the troops from the Criminal Investigation and Detection Group, the 3rd Infantry Battalion of the Philippine Army, and the Negros Occidental Police Provincial Office raided the offices of Bayan Muna, Kilusang Mayo Uno, Gabriela, Anakpawis and the National Federation of Sugar Workers (NFSW) in Bacolod City.

Those who were apprehended were brought to the Negros Occidental Police Office while the minors were turned over to the custody of the Department of Social Welfare and Development.

Pancito said the operation was conducted after they received reports from concerned citizens that some people in these areas were keeping illegal firearms and explosives.

Pancito said they decided to apply for the search warrants in Quezon City because they believed that the targets of their operations also involved national personalities.

He said the offices they raided were believed to be “training centers” of newly recruited young individuals by the New People’s Army (NPA).

Judge Cecilyn Burgos Villavert of the Regional Trial Court Branch 89 in Quezon City issued the arrest warrants against the suspects.

Michael Dela Concepcion, secretary-general of Bayan Muna in Negros, said Rosales is the spokesperson of Kilusang Mayo Uno, while Dela Cena is a trainer for a cultural group of one of the organizations.

Dela Concepcion also identified Lozande as the secretary-general of the National Federation of Sugar Workers, Quiatzon as a staff member of Karapatan Negros, Bito-on as a coordinator of Makabayan Negros, and Tabura as spokesperson of the Kilusang Magbubukid Ng Pilipinas (KMP).

Bayan Muna believed the guns and hand grenades were “planted” by the state forces.

“They conducted the raid at night before a long weekend so as to ensure that the courts are closed tomorrow so that the planted pieces of evidence and subsequent trumped-up charges filed cannot immediately be challenged,” a Bayan statement said . 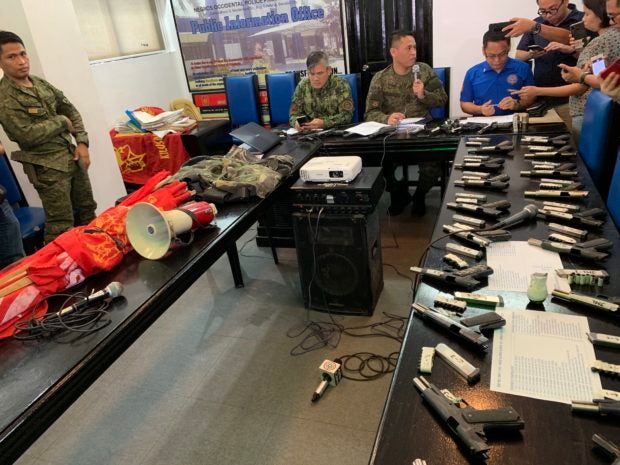 “We demand that these attacks against progressives be stopped. All freedom-loving citizens must unite, stand up and resist against this systematic harassment,” it added.

“The Armed Forces of the Philippines (AFP) and the Philippine National Police (PNP) seems to be concocting another wave of intensified crackdown against progressives and opposition forces in the Negros Island. There is indeed an undeclared martial rule in Negros and this should be soundly condemned and opposed.”

The Kilusang Magbubukid ng Pilipinas (KMP) described the raids and arrests as “outright overkill and illegal.”

“Those who were rounded-up must be released unscathed,” said KMP chairperson Danilo Ramos.

A few days ago, Espenido blatantly said that “it would be God’s will if blood would flow in Bacolod City” in the course of his anti-drugs and anti-criminality campaign.

The Inquirer tried but failed to reach Espenido through the phone on Friday.

Ramos believed the attacks happened with the knowledge and authorization of President Duterte.

“This is de facto Martial Law creeping in Negros island and the rest of the country. The conduct of these mass raids were clearly illegal and unjust that the raiding teams had to come up with preposterous accusations that the civilians were allegedly conducting firearms and explosives training in the offices,” he said.

KMP and other progressive groups, he said, would lead indignation activities in the coming days./lzb