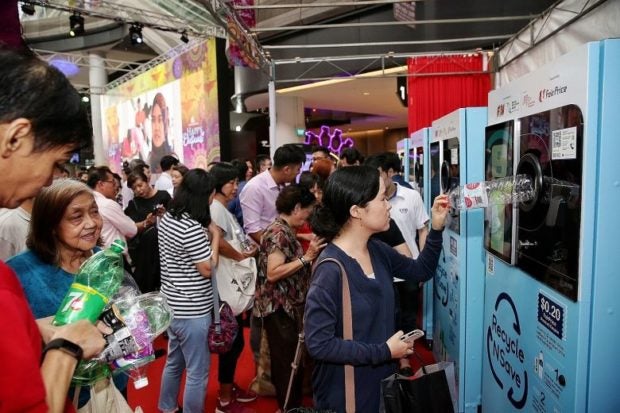 Members of the public using the “reverse” vending machines at the launch of the Recycle N Save initiative at Our Tampines Hub yesterday. For every four drink receptacles deposited, a discount voucher worth 20 cents that can be used at any FairPrice, Cheers or FairPrice Xpress outlet will be given. ST PHOTO: KEVIN LIM

SINGAPORE — In a corner of Our Tampines Hub is a vending machine unlike any other found at the integrated hub.

Instead of accepting coins and notes, it takes in empty drink cans and plastic bottles. And rather than dispensing drinks, it gives out discount vouchers.

For every four drink receptacles deposited, a discount voucher worth 20 cents – that can be used at any FairPrice, Cheers or FairPrice Xpress outlet – will be given.

This “reverse” vending machine, like 49 others that will be progressively rolled out across the island by March next year, is the biggest initiative of its kind by the National Environment Agency (NEA) to encourage the public to recycle.

The machines can be found at the FairPrice supermarkets in malls such as AMK Hub, Nex and Jurong Point.

The Recycle N Save initiative by the NEA and drinks manufacturer Fraser & Neave (F&N) was launched yesterday following favourable response from the public to the pilot initiative at Waterway Point in Punggol in January last year.

The machine used for the pilot initiative has been replaced with an updated one, which was among the first batch of 10 rolled out yesterday.

The reverse vending machines will help in efforts to tackle packaging waste, one of the priority waste streams – alongside food waste and electronic waste – identified in Singapore’s Zero Waste Masterplan, said Environment and Water Resources Minister Masagos Zulkifli at the launch at Our Tampines Hub.

“Realising Singapore’s vision of a Zero Waste Nation will require strong partnerships between the Government, people and businesses to co-create and co-deliver pragmatic solutions for our environment,” he added.

“Today’s event is a wonderful example. We look forward to having more industry partners on board for future Zero Waste initiatives.”

NEA chief executive Tan Meng Dui said the programme is part of the agency’s effort to test out different public collection systems, as it works towards implementing the Extended Producer Responsibility scheme for packaging waste over the next few years. The scheme makes manufacturers of products financially and physically responsible for the end-of-life collection and treatment of the items.

The new reverse vending machines, which accept bottles of up to 2-litre capacity, are fitted with a compactor that flattens the drink cans and bottles to save space.

They can hold up to 600 aluminium cans and plastic bottles, about five or six times the capacity (in the pilot initiative), said F&N Foods Singapore managing director Jennifer See.

Once a machine is 80 percent to 90 percent full, an alert is automatically sent (to F&N). The crushed items will then be collected and sent for recycling together with other recyclables collected in the mall.

Mr Lee Meng Tat, chief executive of the non-alcoholic beverages division at F&N Foods, said: “With the launch of this initiative, F&N reinforces its commitment to play its part in protecting the environment by ensuring that its packaging is environmentally friendly, and to encourage and reward consumers to recycle the cans and bottles.”

The smart machine takes in only drink packaging made of aluminium and plastic and does not accept glass bottles.

Cans and bottles that are not fully empty will also be rejected. The machine has in its database the barcodes of over 1,000 drinks in the market, and rejects items that are 20 per cent heavier than their expected weight when empty, said Ms See.

Tampines resident David Ho, 38, pointed out that the machine does not accept all plastic bottles as it recognises only selected barcodes. “It is not too user-friendly as it does not recognise some barcodes, such as those on herbal tea bottles.”

Ms See said the firm is working to add new barcodes to the existing database in the vending machines.