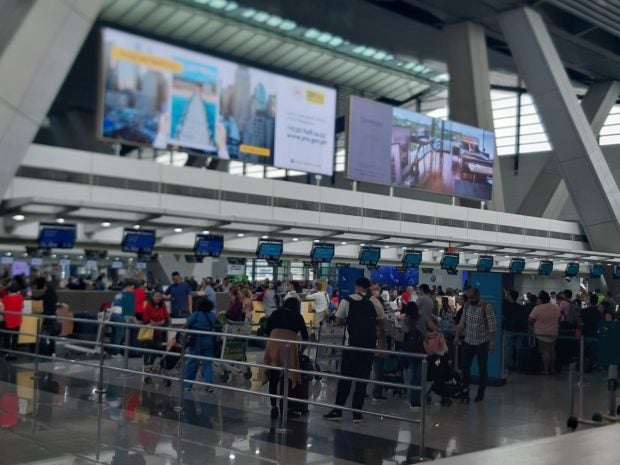 Lines are building up at the check-in counters of NAIA Terminal 3 in Pasay City on Thursday, October 31, 2013, as travelers leave for the province or abroad to spend their Undas holidays. INQUIRER.net / Neil Arwin Mercado

MANILA, Philippines — Some travelers who fear being left out on their flight have found ways to beat the anticipated heavier traffic jams and long queues as passengers race to airport check-in counters this Undas season.

Merflor Drapieza, an overseas Filipino worker bound for Dubai, left Nueva Ecija as early as Wednesday night to make sure she would not miss her Thursday departure schedule.

Drapieza, together with her husband and son, booked a room in Cubao, Quezon City to spend the night. This way, she said, they would be sure they will reach the Ninoy Aquino International Airport (Naia) in time for her 3:20 p.m. flight.

(It is hard, you might miss your flight. There may be heavy traffic as well so we avoided that. So we arrived earlier than expected.)

She said situation at the airport remains “okay” despite waiting in line before check-in counters for a few minutes.

(This is the hardest since many passengers are leaving. You have to catch up. Or you might be left behind.)

Meanwhile, Merly Remperas, who was to leave for Butuan City 6:35 p.m. Thursday left Quezon City early and arrived at NAIA before 12:00 noon – more than six hours prior to her flight. Remperas was set to visit her late father-in-law in the province

(I want to avoid the traffic, there may be a lot of passengers.)

“No issues so far, sana tuloy-tuloy (hope it continues), there are no problems so far because before this season, we had the opportunity to meet with all the airlines and stakeholders and reminded them of what things to be done and what things to be addressed so that our operations will be smooth especially this peak season,” Monreal said in a phone interview with INQUIRER.net.

MIAA Airport Police Department-Landside Police Division earlier reported that traffic build-up during Undas season along roads around NAIA usually happens around 7 a.m. to 8 a.m. and around 5 p.m. to 8 p.m.

Measures, however, are being implemented including the deployment of traffic enforcers and the imposition of manual traffic control to help ease traffic.

Monreal likewise had a few tips for airport passengers: