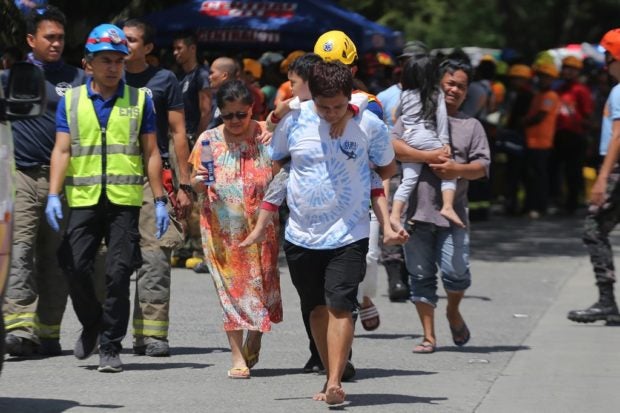 Residents are evacuated from a damaged condominium building after a 6.5-magnitude earthquake hit Davao City in the southern island of Mindanao on October 31, 2019. A powerful quake struck in the southern Philippines on October 31 sending people fleeing from homes, schools and malls, with initial reports of damage to some buildings. Photo by Manman Dejeto / AFP

MANILA, Philippines –– Davao City’s local government unit (LGU) has assured residents that they are on top of the situation, even in the aftermath of another strong earthquake on Thursday morning.

Davao City Mayor Sara Duterte-Carpio said they intend to inform her father, President Rodrigo Duterte, that they are capable of addressing the needs of the people.

The older Duterte was in Davao when the quake happened.

People close to the President said he was safe although several cracks were found inside his Davao house.

“We have not talked but we assured that the city government is on top of the situation here in Davao so that he (President Duterte) can focus on areas also badly hit by the earthquake,” Duterte-Carpio told reporters in a press conference.

“What I only know is that he is here, although I don’t know if he has already left,” she added.

After a magnitude 6.5 quake struck 33 kilometers off Tulunan in Cotabato, several buildings reportedly collapsed, including the Ecoland 4000 condominium in the Matina area of Davao City.

At least nine persons were injured in the incident, while rescue teams were still sweeping through the damaged building.

Duterte-Carpio said the city was leaving it up to building administrators to decide whether their establishments should continue operation or closed in the aftermath of the earthquake.

“Coordination of the city engineering office with malls and establishments are ongoing,” Duterte-Caprio noted. “… the buildings have their inspectors, they do self-check.”

“After that, there would be a second check by people from the City Engineer’s Office,” she added.

The mayor also said she had talked with some mall managers in Toril area.  The mall managers told her they would continue operations as there was no damage to the mall.

“I just came from one mall in the Toril area, and I talked to the building manager, the building assessment is ongoing and they have not seen any big damage for them to close their mall,” she relayed.

“We leave the decision to close or stop activities to the building manager and the supervisors,” Duterte-Carpio added. /lzb