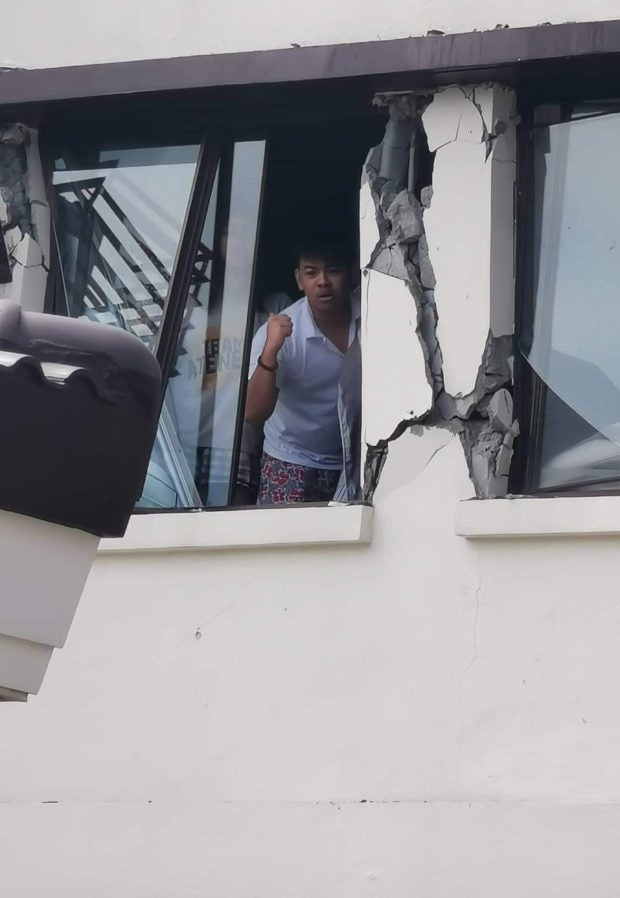 A resident calls for help inside their damaged condominium building after a 6.5-magnitude earthquake hit Davao City, on the southern island of Mindanao on October 31, 2019. Photo by DONG ABION / AFP

DAVAO CITY –– Classes are suspended in the city from Thursday until Monday to ensure the full inspection of school buildings.

City Mayor Sara Duterte explained that the length of suspension took into consideration the holiday and weekend.

“We suspended the classes from kinder to post-grad in both public and private schools. We intend to extend the cancellation until Monday because tomorrow is a holiday and may weekend pa,” Duterte said.

Duterte added that the local government understood that the owners and inspectors of buildings in the city would need enough time for the inspection because of the holiday.

Meanwhile, the City Engineers Office is re-assessing two major bridges in the city because of visible minor cracks.

“For now we have limited the passage of vehicles at the Bolton Bridge to 20 tons. The bridge will not be able to carry vehicles beyond 20 tons because of the damage at the diaphragm,” Duterte said.

The Mayor asked commuters and drivers to avoid using the Bolton Bridge.

Duterte shared that all government buildings were already cleared and declared safe.

The local government also clarified that there are no tsunami warnings and no pre-emptive evacuations.

“What we don’t want is mag-panic ang residents. We urge people to check their infrastructure every time there is an aftershock,” Duterte said./lzb