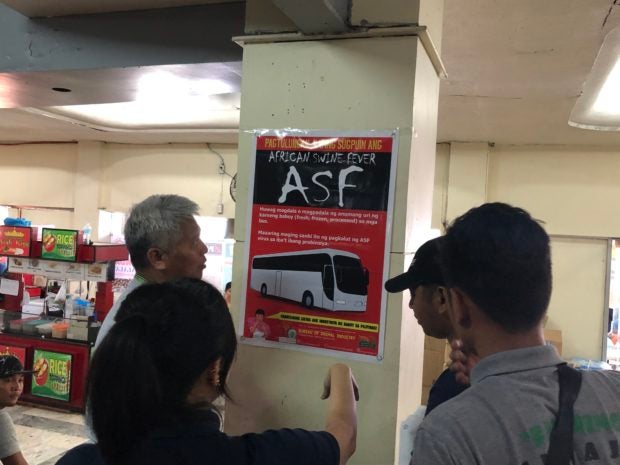 Personnel from the Bureau of Animal Industry put up posters at the Araneta bus terminal, urging against bringing pork products in the buses. Photo by Daphne Galvez / INQUIRER.net

MANILA, Philippines — Travelers going to their respective provinces to observe All Saints’ Day and All Souls Day should not bring along any pork meat products or those would be seized by law enforcers, at least, at the Araneta Bus Terminal in Cubao, Quezon City.

Personnel from the Bureau of Animal Industry (BAI) on Thursday put up posters at the bus terminal, urging travelers to help curb the spread of African swine fever (ASF) by not transporting pork meat products – whether fresh, frozen or processed.

“Maaaring maging sanhi ito ng pagkalat ng ASF virus sa iba’t-ibang probinsiya (This could cause the spread of ASF virus to other provinces),” it added.

WATCH: Personnel from the Bureau of Animal Industry put up posters at the Araneta Bus Terminal, telling passengers not to bring pork meat (fresh, frozen, process) on the bus. @inquirerdotnet pic.twitter.com/bJ8CkvK57U

This is the first time that such posters were placed at the bus terminal, said Araneta bus station general manager Ramon Legazpi.

Passengers and their luggage will be checked upon entry to the Arante Bus Terminal to make sure they do not carry any pork meat product before they board a bus, according to Legazpi.

“May mga entances tayo so binubuksan naman natin ‘yung ibang mga bagahe nila so nakiusap pa ang Department of Agriculture (DA) for the campaign against dito sa African swine fever, (At the entrance points, our security personnel would open or check the baggage of passengers so DA asked us to help them in their campaign against ASF,” Legazpi noted during interview.

(Travelers with meat products are already advised upon entry that their items must be checked so those would not be brought to provinces.)

If a passenger was caught bringing any pork meat product, the bus terminal management would refer the matter to the police or DA personnel on standby, according to Legazpi.

(We will bring the matter to the police help desk, even DA has personnel stationed here so they could decide on the matter.) /kga