US to send security envoy, commerce secretary to ASEAN meet 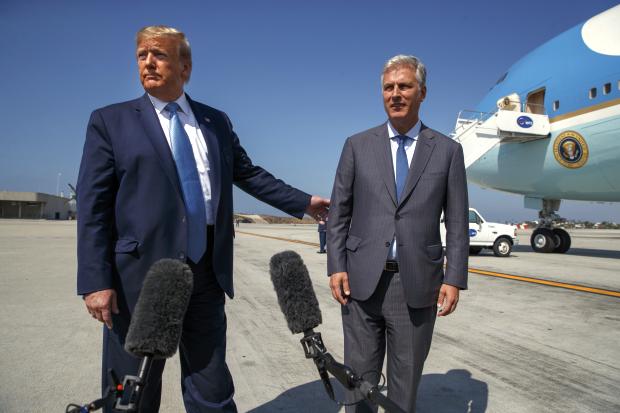 In this photo, taken Sept. 18, 2019, U.S. President Donald Trump and new national security adviser Robert C. O’Brien talk with reporters before boarding Air Force One in Los Angeles. U.S. national security adviser O’Brien and Commerce Secretary Wilbur Ross will represent President Donald Trump at two regional summits in Thailand this weekend, the White House announced, a move that would widely be viewed in the region as a snub. (Photo by Evan Vucci / AP)

BANGKOK — U.S. national security adviser Robert C. O’Brien and Commerce Secretary Wilbur Ross will represent President Donald Trump at two regional summits in Thailand this weekend, the White House announced, a move that would widely be viewed in the region as a snub.

The decision to send O’Brien, who is a presidential adviser and not a member of Trump’s Cabinet, is likely to be viewed in Southeast Asia as sign of a lack of engagement in the region at a time when China’s influence and investments are quickly growing.

The announcement late Tuesday comes just days before Thailand is due to host the 10-nation Association of Southeast Asian Nations annual summit and the accompanying East Asia summit. The summits include sideline meetings that involve the U.S. and other major countries, including China, Russia, Japan and South Korea.

O’Brien recently took on his role after national security adviser John Bolton was ousted by Trump. He earlier was Trump’s chief hostage negotiator and is an established figure in Republican Party circles.

Ross is leading a Nov. 3-8 trade delegation to Bangkok and will speak at an Indo-Pacific Business Forum on Monday.

Secretary of State Mike Pompeo did attend a meeting of ASEAN foreign ministers in Bangkok in August. At the time he spoke of how U.S. interests converge with those of countries in the “Indo-Pacific” — the regional concept Washington has promoted in recent years to counter China’s rising profile and its “Belt and Road” infrastructure initiative.

In a recent wryly worded piece in the English-language newspaper Bangkok Post, he noted that Trump’s attendance would have been a welcome validation of ASEAN’s importance.

China’s representative to the meetings in Nonthaburi, near Bangkok, will be its premier, Li Keqiang. Japanese Prime Minister Shinzo Abe and other heads of state also are attending.

Trump is expected to attend a Pacific Rim summit of the Asia-Pacific Economic Cooperation forum in Chile next month.

The Thai government has been ramping up security in advance of the summits and warning of road closures. Bangkok residents will get two days of “special holidays” to help alleviate traffic congestion for the summits, which are being held in a neighboring suburb.

Earlier, Thailand had announced Trump had accepted an invitation to visit the country. That had raised hopes he might attend the ASEAN meetings.

Regional trade ministers were hoping to make progress toward completing a long-awaited free trade agreement at the meetings. But officials are still working out technical details and rules on market access, competition and investment for the planned Regional Comprehensive Economic Partnership.

The countries negotiating the pact include ASEAN, and six of its dialogue partners: China, Japan, South Korea, Australia, New Zealand and India. It does not include the U.S.

If all join, it will be one of the biggest regional trading blocs, covering some 45% of the world’s population and about a third of global GDP, with projected trade of more than $10.3 trillion, almost 30% of the world total.