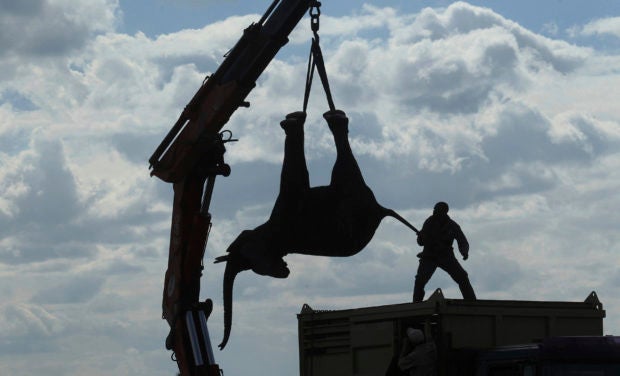 In this Tuesday, July 12, 2016 file photo, an elephant is lifted by a crane in an upside-down position in Lilongwe, Malawi, in the first step of an assisted migration of 500 of the animals. The relocation of elephants to Malawi’s largest wildlife reserve was meant to be a sign of hope and renewal in the southern African nation but then residents started falling ill. The cause of the headaches, weakness, and pain were trypanosomes, tiny parasites spread by the bite of the tsetse fly, a companion of the elephants. (AP Photo/Tsvangirayi Mukwazhi, File)

NKHOTAKOTA, Malawi — The relocation of hundreds of elephants to Malawi’s largest wildlife reserve was meant to be a sign of hope and renewal in this southern African nation. Then nearby residents began falling ill.

The cause of the headaches, weakness, and pain were trypanosomes, tiny parasites spread by the bite of the tsetste fly – a companion of the elephants. Trypanosomiasis, or sleeping sickness, is the result.

Local families described the toll the disease can take.

“I feel too weak,” said Chiomba Njati, who was still recovering after a week in the hospital. He said he was bitten while farming near the wildlife reserve. “I cannot even carry a hoe and farm. The home is lacking food and other important things because it is my wife doing everything on her own. This is so worrying.”

Authorities said the Nkhotakota wildlife reserve has seen a surge in tsetse fly numbers since around 2015 when the elephants and other game animals were reintroduced.

The local hospital said it did not have a number of sleeping sickness cases. One community resident, Group Village Ngondo, recalled at least five deaths from the disease.

The World Health Organization (WHO) said sleeping sickness is endemic in 36 countries in sub-Saharan Africa but cases have been dropping. Last year, just under 1,000 cases were recorded, a new low. The majority of cases are reported in Congo.

The disease is “notoriously difficult to treat” with drugs and easier to treat when caught early, WHO said. The health agency says it is usually fatal when untreated as the parasite moves into the central nervous system and eventually can cause seizures and coma. 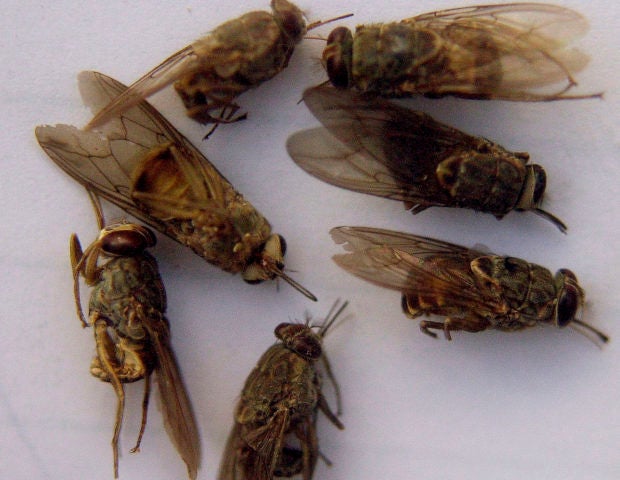 In this June 1, 2002 file photo, dead tsetse flies on display in a laboratory run by the International Livestock Research Institute in Ghibe Valley, near Addis Ababa, Ethiopia. In the southern African nation of Malawi, Trypanosomiasis, or sleeping sickness, has caused residents to become ill from tiny parasites that are spread by the bite of the tsetse fly. (AP Photo/Sayyid Azim, File)

“One tsetse can actually infect a lot of people at once,” she said. “So we don’t want to take chances.”

Some villagers expressed concern about the reintroduction of wildlife and the enlargement of the nearby reserve.

The African Parks field operations manager for the reserve, David Robertson, acknowledged that the reintroduction of animals in 2015 led to an increase in tsetse flies.

“It is a bit ironic because it is a negative symptom of the success we are having,” he said. “By increasing animal numbers, one of the unfortunate consequences could be an increase in tsetse fly numbers. Even though they are a natural part of the system, they contribute to biodiversity.”

The tsetse flies are something the park workers need to manage differently, Robertson said. “We don’t want to have neighboring communities or tourists to the park having an unpleasant experience or dangerous experience though contact with tsetse flies so we will do our best to manage that in the future.”

To address the problem, African Parks in collaboration with Malawi’s government has introduced pesticide-impregnated targets and traps that attract the flies. So far 600 have been placed in the wildlife reserve.

They are placed near the edge of thickets in areas that will receive morning and evening light but are shaded from the most intense sunlight during midday hours. The area surrounding each is slashed and cleared with hoes to produce a firebreak to protect it from occasional wildfires.

Controlling the flies and animal populations are ways to help fight the disease. More assertive diagnosis and treatment are others.

Local medical personnel has been receiving more training to screen for and diagnose trypanosomiasis.

“This leads to early diagnosis and treatment,” he said. /kga

Read Next
Mom protests as cemetery officials remove Halloween decor on son’s grave
EDITORS' PICK
Smart releases Hyun Bin’s second TVC
Current dominant strain of COVID-19 more infectious than original—study
Water remains our saving grace right now
DOLE: Return of OFWs’ remains from Saudi to be ‘delayed,’ deadline moved to ‘early next week’
‘Justice will be done,’ Duterte assures as he vowed probe on Jolo incident to bare ‘truth’
EuroMillions Superdraw: A lottery draw unlike any other is coming to the Philippines
MOST READ
Duterte tells military: No other president looked at you the way I did
BREAKING: Duterte signs anti-terror bill into law
Locsin warns of ‘severest response’ if China’s army drills in SCS ‘spill over’ to PH domain
Vico: Cleanup of bidding process saved Pasig gov’t P415M
Don't miss out on the latest news and information.