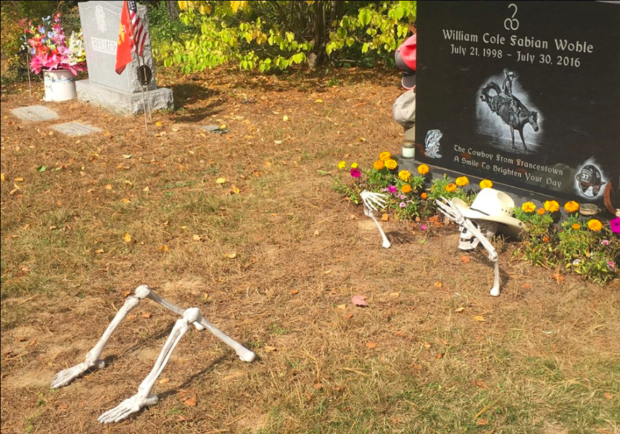 A mother just wanted to have “a little fun with death” as she decorated her deceased son’s grave with a lifesize skeleton wearing a cowboy hat for Halloween. However, Christina Wohle from New Hampshire, United States has had to appeal to cemetery officials to stop removing her Halloween decorations.

Apparently, she had to set the skeletons props up thrice in three days because the cemetery maintenance staff kept on removing them. She said, “There isn’t anything in the cemetery regulations prohibiting [the decorations], as there shouldn’t be.”

I getting tired of Cole’s Halloween decorations being removed! This is rude! There is nothing wrong with having a little…

Her son William “Cole” Wohle died in 2016 due to a heart attack after a rodeo competition, as per a New Hampshire Union Leader report last Monday, Oct. 28. He had just turned 18 then.

Wohle shared with the local newspaper that she found the fake bones behind the tombstone. Polly Freese, the cemetery’s chairman said they had the right to remove any decoration they deemed was not fit in the cemetery.

“It’s really frustrating because you’re dealing with emotion on the one side, and with the law on the other, and we’re coming across as the bad guys,” Freese was quoted as saying in the report.

The chairperson also clarified that the bones were in the way of the mowers. Wohle replied that the cemetery hasn’t been mowed since September, even citing that her son’s grave has no grass to mow.

The mother also said neither Freese nor any of the other cemetery commissioners reached out to her or her family about the decoration. Freese clarified that the commission was under no obligation to contact Wohle.

“Sometimes you have to laugh, because there is so much to cry over,” the mother said in her post. “This is October, get some spirit!” Cha Lino/NVG

A look back at top models’ best Halloween 2018 looks