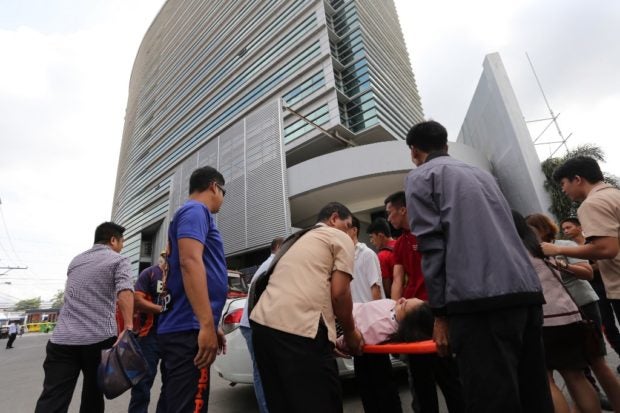 An office worker is carried on a stretcher after she fainted at the height of the earthquake that hit Davao City, in southern island of Mindanao on October 29, 2019. A 6.6-magnitude quake struck the southern Philippines on October 29, authorities said, causing injuries and damaging buildings in a region still reeling from a previous deadly tremor. Photo by Manman Dejeto / AFP

DIGOS CITY –– Mayor Josef Cagas has declared a suspension of classes in all levels, both in private and public schools, starting Wednesday “until further notice” in the wake of fresh damage wrought on the city by Tuesday’s 6.6-magnitude quake that struck off Tulunan, Cotabato.

Apart from classes, Cagas also ordered the suspension of work in all government offices “except for those whose services and responsibilities pertain to emergency response and services, hospitals, security, peace and order, payroll preparations, and other vital government services.”

Cagas said the recent earthquake compromised the structural integrity of several government buildings “it is only proper that the safety of our people be our priority.”

But Cagas left to management discretion the decision to have work in the private sector resume, although he reminded them that “the safety of their employees, workers, clients, and customers” should not be compromised.

Amid continuing tremors, many residents here have taken to social media exchanging information about a supposed upcoming magnitude 8 quake.

Cagas admonished residents to stop circulating such misleading information as the occurrence of quakes is beyond prediction and control. /lzb