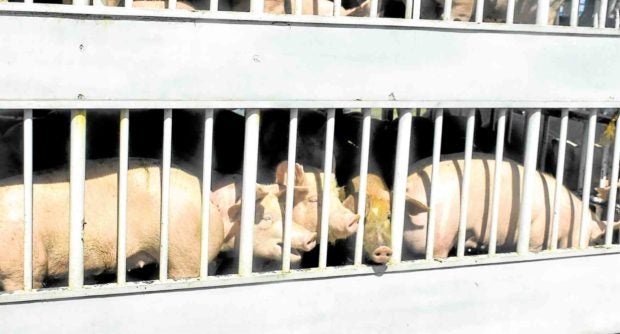 AWAITING ASSURANCE The Philippine Association of Meat Processors Inc. has decided to stop buying local pork to contain the spread of the African swine fever virus, a move that has drawn criticism from other local industry groups. —WILLIE LOMIBAO

To import or not to import pork.

Pampi, the country’s largest group of meat processors, has decided to stop the purchase of local pork to contain the spread of the African swine fever (ASF) virus, a move that has drawn criticism from other local industry groups.

In a statement, Pampi on Tuesday said it had asked members to stop buying local pork until hog producers “are able to assure government authorities and the consuming public that local pork is ASF-free.”

Cases of African swine fever have been reported in Cavite, Rizal, Bulacan, Pampanga, Nueva Ecija and Pangasinan provinces, and in Quezon City.

Pampi said its decision to stop using pork from the domestic market was sparked by latest laboratory results from the Bureau of Animal Industry and the “continued warning of the Department of Agriculture to local swine groups not to feed swill to their pigs.”

Sinag described Pampi’s move as “pure bluff” and nothing but an empty threat. “They have never bought from us in the first place,” it said.

Sinag is composed of groups of rice, corn and vegetable farmers and traders; pork, livestock and poultry producers; aqua-venture groups; and fertilizer and pesticide suppliers from Luzon, the Visayas and Mindanao.

Earlier, it called on Agriculture Secretary William Dar to suspend the issuance of sanitary and phytosanitary (SPS) permits for pork imports and to cancel all applications for SPS.

Rosendo So, Sinag chair, said the pork importation was the source of swine disease in the country.

“The original sin of the ASF pandemic are pork imports, the very raw material of this processors’ group,” So said in a statement on Tuesday.

He said pork importation should be stopped until the government establishes the Quarantine First Policy, a strip inspection at the port of first entry.

ASF in 19 other countries

These companies get from the domestic market some 15,000 metric tons of pork every year, or just 5 percent of their annual requirement, and less than 1 percent of the country’s livestock production. The remaining 95 percent is imported.

Pampi spokesperson Rex Agarrado said a huge number of the group’s raw materials were previously imported from Germany, but after pork products from Poland that were labeled to have come from Germany were intercepted by authorities, the group decided to import pork somewhere else.

Currently, Pampi’s imports come from the Netherlands, Canada and the United States.

Asked whether there could be an increase in the prices of processed meat products in the market amid the spike in pork world prices, Agarrado said no.

“The cost of pork shoulder and hams in the world market have gone up by 40 to 60 percent and we’re really losing big here,” he said. “How can we increase our prices when demand is going down?”

The Associated Labor Unions-Trade Union Congress of the Philippines, meanwhile, urged government officials on Tuesday to be more cautious in tagging products believed to be infected with African swine fever, as this may result in job losses at affected companies.

Earlier, Pampanga-based Mekeni Food Corp. recalled its pork products following reports that a batch of its hot dog, “longganisa” (sausage) and “tocino” (cured pork) were tainted with the disease.

So said the call of the meat processors’ group for the public to stop buying from local hog raisers was “unfortunate and callous.”

“Why don’t they [meat processors] police their own ranks instead of blaming maliciously the hapless backyard raisers?” he said.

The National Federation of Hog Farmers assured the public that local pork was safe.

Its president, Chester Warren Tan, noted that there had been no news of new outbreaks for the past week, “which is good news for us.”

In Pangasinan, Mayor Clark Tiu of San Quintin on Monday issued an executive order banning the entry of live pigs and pork products into the town to avoid the spread of African swine fever in the province.

On Oct. 21, the municipal government of Bayambang declared a state of calamity in at least seven villages after the ASF virus was detected in 30 blood samples taken from a backyard piggery. —With a report from Jovic Yee