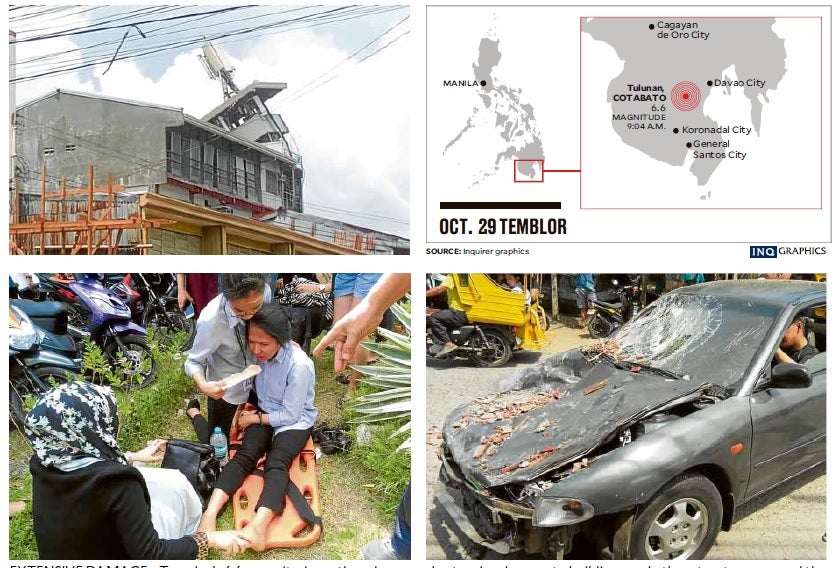 EXTENSIVE DAMAGE Tuesday’s 6.6-magnitude earthquake caused extensive damage to buildings and other structures around the epicenter near Tulunan, Cotabato province, and injured scores of people, including seven who died after being hit by falling debris. —AP/CONTRIBUTED PHOTOS

Buildings swayed on Tuesday morning as a powerful earthquake rattled the same areas in Mindanao rocked by a strong tremor two weeks earlier, killing at least seven people, cracking concrete walls, and sending patients out of hospitals, and office workers and students running into the streets and open spaces in panic.

The Philippine Institute of Volcanology and Seismology (Phivolcs) said the 6.6-magnitude quake struck around 9:04 a.m. about 25 kilometers southeast of Tulunan town in Cotabato province.

Phivolcs director Renato Solidum said the area was a seismic zone with several nearby faults.

“The possibility that the earthquakes were generated by the same fault exists and needs to be verified,” he told the Inquirer.

The quake was centered close to the Oct. 16 6.3-magnitude temblor that killed five people and was at a relatively shallow depth of 7 km. The epicenter of the earlier quake was 9 km.

The more shallow the earthquake, the more it is felt on the surface and can be more damaging, according to Phivolcs science research specialist Erlinton Olavere.

According to reports from civil defense offices and the police, the quake killed two people in Magsaysay town, Davao del Sur — Grade 9 student Jessie Riel Parba of Kasuga National High School, who was hit by falling debris as he ran out of the school building, and Benita Saban, who was buried in a landslide in Barangay Tagaytay.

Marichel Morla, who was pregnant, was killed when she was hit by a falling beam of a house at Barangay Banayal in Tulunan that she was just visiting.

In Arakan town, Cotabato province, Angel Andy, 22, and his son Reneboy, 7, died when rocks loosened by the quake rolled over them.

In Digos City, Jeremy Sarno, 36, was riding a motorcycle to evacuate to safer grounds when he suffered a heart attack.

Some students were injured in a stampede to escape from a school building, according to a report by Agence France-Presse (AFP).

Many parents rushed to the schools to fetch their children. Local authorities immediately declared class suspensions in Cagayan de Oro, Koronadal, Digos and Davao cities, among other towns and cities.

Several local and provincial officials also suspended work for the rest of the day, keeping only essential staff to help in relief work.

Police Cpl. Krister John Nahine, Magsaysay police spokesperson, said about 300 other people were injured in the five villages that were the worst hit in the town—Upper Bala, Maibo, Tagaytay, Balnate and Kasuga.

Patients, many still connected to intravenous drips, were wheeled out of hospitals to roadsides or makeshift shelters as the quake struck. Terrified residents ran into the streets as schools and offices opened for the day.

The shaking lasted up to a minute in some areas, damaging homes, multistory buildings and classrooms in a region where hundreds are still displaced by the earlier tremor, AFP reported.

“Buildings were not just moving, they were swaying,” Gadi Sorilla, a doctor at a hospital in Tulunan, told AFP.

“I asked God for help,” he said, adding the hospital had quickly received about 10 patients, some with head injuries.

Tulunan Mayor Reuel Limbungan said the local municipal hall had been heavily damaged and authorities had received “lots of reports of injuries.”

Rescue teams have begun fanning out to assess the damage to the region, where electricity and phone services were knocked out by the power of the quake.

The continuing tremors were causing anxiety among people, who refuse to go back inside buildings for fear of being caught in any resulting collapse.

As of 1 p.m. on Tuesday, more than 80 aftershocks had been recorded. The strongest, a 6.1-magnitude tremor, rocked Tulunan around an hour and a half after the main quake.

According to Phivolcs, Intensity 7 was felt in Tulunan and Makilala in Cotabato, Kidapawan City and Malungon in Sarangani province, and Intensity 6 in the cities of Davao, Koronadal and Cagayan de Oro.

Based on the Phivolcs earthquake intensity scale, an Intensity 7 could result in destructive shaking of the ground where it would be difficult for people to stand in upper floors and heavy objects and furniture are overturned or toppled.

Schools across the area have been shuttered as a precaution.

“We still have 570 individuals in evacuation centers (from the previous quake) and with this quake, we are expecting more evacuees,” said Zaldy Ortiz, an officer with a local emergency rescue team.

Catholic Church leaders called for prayers for those affected by the earthquake.

“Also, let us be open to help those affected once the dioceses, parishes in the said area call for assistance,” Manila Archbishop Cardinal Luis Antonio Tagle said on Church-run Radio Veritas.

According to Kidapawan Bishop Jose Colin Bagaforo, residents in affected areas remain outside of their homes, fearing aftershocks.

Fr. Jun Balatero, rector of the Kidapawan cathedral, said the church would be open to accommodate evacuees.

“Please pray to the Lord that we may remain calm and alert, and pray also that we will continue to care and be watchful and concerned for each other during this time of fear and anxiety,” Davao Archbishop Romulo Valles, president of the Catholic Bishops’ Conference of the Philippines, said in a letter to the dioceses.—Reports from Jeannette I. Andrade, Julie M. Aurelio, Jhesset O. Enano, Tina Santos, Abner Francisco, Bong Sarmiento, Edwin O. Fernandez, Eldie Aguirre, Karlos Manlupig, Williamor Magbanua, Taher Solaiman, Leah Agonoy, Richel Umel, Froilan Gallardo, Mart Sambalud, Germelina Lacorte, Inquirer Research, and the wires