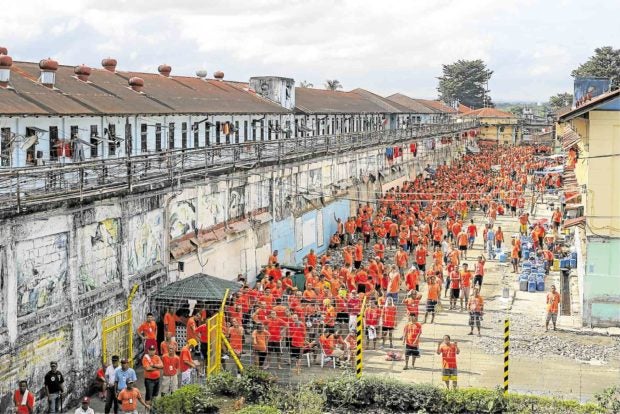 DEATHS IN DETENTION From January to September this year, 329 inmates died at New Bilibid Prison, according to the Bureau of Corrections. —EARVIN PERIAS

MANILA, Philippines — A total of 29 inmates at New Bilibid Prison (NBP) in Muntinlupa City have died of various causes within a 17-day period, based on data from the Bureau of Corrections (BuCor).

From Oct. 9 to 25, the BuCor said that 10 prisoners at the national penitentiary died of contagious pneumonia and pulmonary tuberculosis.

The five remaining fatalities were set to be autopsied to confirm their causes of death.

Since Oct. 9, the BuCor chief, Director General Gerald Bantag, has banned visits to inmates at NBP which has been undergoing intensive clearing operations to rid it of drugs and other forms of contraband.

Bantag dismissed the claims of Kapatid, a group advocating prisoners’ rights, that the deaths were caused by the lack of medical attention being given to prisoners.

“Even before the demolition, many were already dying,” he told reporters on Monday, adding that those who died had medical issues that would have eventually caused their demise.

From her detention cell at the Philippine National Police custodial center, Sen. Leila de Lima called for humane treatment for inmates at the national penitentiary, saying that depriving them of their basic needs was like handing them a death sentence.

She said she had received information from a prisoner’s wife, in addition to reports, that conditions at NBP had deteriorated following the clearing operations being implemented by Bantag.

“To allow persons deprived of liberty to live in decrepit and abusive prison conditions is a death sentence,” De Lima stressed in a statement.

She took note of reports quoting Samahan ng mga Pamilya na nasa Death Row as claiming that eight NBP inmates had died due to dehydration after prison officials cut off the water supply.

This was amid the ongoing crackdown on contraband at the facility, which also reportedly led to the suspension of visitation rights and the destruction of some inmates’ sleeping quarters.

NBP officials, however, denied that some prisoners had died due to dehydration.

According to De Lima, Bantag should be held accountable for the suffering of the inmates brought about by the demolition of their quarters without contingencies or provisions for decent living conditions.

Bulk of deaths at NBP

From January to September this year, BuCor data showed that the bulk of inmate deaths occurred at NBP, accounting for 329 of the 507 deaths reported in the agency’s seven prisons and penal farms.

Last year, there were a total of 601 fatalities, with the national penitentiary accounting for 394 deaths.