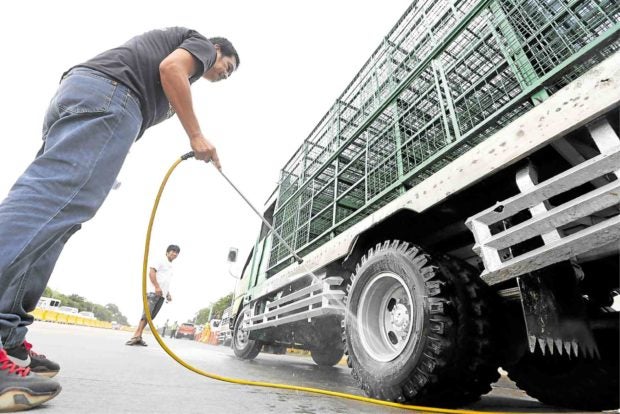 STOPPING ANIMAL DISEASE A livestock delivery truck is sprayed with disinfectant as it passes through a disinfection site along Star Tollway in Tanauan City, Batangas. The Department of Agriculture has set up a “road bath” along the expressway, a major transport route for live animals and meat products, to prevent the spread of the African swine fever virus. —NIÑO JESUS ORBETA

TANAUAN CITY, Batangas, Philippines — The Department of Agriculture (DA) on Monday installed the country’s first “road bath,” or an automated disinfection facility for delivery trucks and vehicles transporting pork and other animal products, in an effort to contain the spread of the African swine fever virus.

Agriculture Secretary William Dar said the DA would put up more in “critical and strategic” areas as the country battles the spread of swine fever that has affected hog farms in the provinces of Rizal, Bulacan, Pampanga, Pangasinan, Nueva Ecija and Cavite, and Quezon City.

“This [facility] is very important in order to prevent the spread of the [swine fever] virus from Metro Manila and any other area,” Dar said in an ambush interview at the facility’s launch here Monday.

Dar also denied reports that swine fever cases were detected in the cities of Caloocan and Malabon in Metro Manila, noting that there was “no new outbreak area.”

The road bath was installed along the Southern Tagalog Arterial Road (Star) Tollway in this city, a primary gateway in and out of Southern Luzon, specifically Batangas province.

Batangas is a major player in the P250-billion hog industry, being the second top producer of pork and live hogs.

As early as August, when swine fever cases were confirmed in parts of Rizal, the provincial government of Batangas implemented a ban on the entry of live pigs and its products in an effort to seal off its hog farms from the virus.

In Calabarzon, the DA confirmed swine fever cases in Dasmariñas City, Cavite, prompting the provincial government to implement a “lockdown” on the entry and exit of live pigs.

From manually spraying delivery vans, the road bath works with sprinkles installed on the ground and sprays chemical disinfectant upwards to cover the vehicles’ tires.

De Mesa said the DA was putting up at least 12 automated sites across Calabarzon to augment the existing DA and Bureau of Animal Industry inspection sites in the region.

A challenge, however, was how to inspect individuals who might be secretly transporting pork products through public transport vehicles or through unmarked private vehicles, he said.

Dar said the DA and the Food and Drug Administration continued to “validate” the reported contamination of processed pork products.

He said the department had yet to “name” a specific brand or company, even after Pampanga-based meat processor Mekeni Food Corp. recalled a batch of its pork products.

“Bahala sila (It’s up to them, but) it’s a welcome development,” he said.

Read Next
29 New Bilibid Prison inmates dead in 17 days
EDITORS' PICK
Sex on the menu for Pogo workers
SM continues to send relief assistance to remote towns in Batangas
Foreigners prepare to flee as China virus toll tops 100
Best Gift Ideas in the Philippines
First female commodore named
We Can’t Guarantee You’ll Win a P20 Billion Jackpot, But We Can Help You Try
MOST READ
Sex on the menu for Pogo workers
Kobe Bryant’s body identified among helicopter crash victims
Virus outbreak death toll in mainland China rises to 132, cases increase to 6K
Kobe Bryant gear pulled out of Nike online store in wake of his death
Don't miss out on the latest news and information.