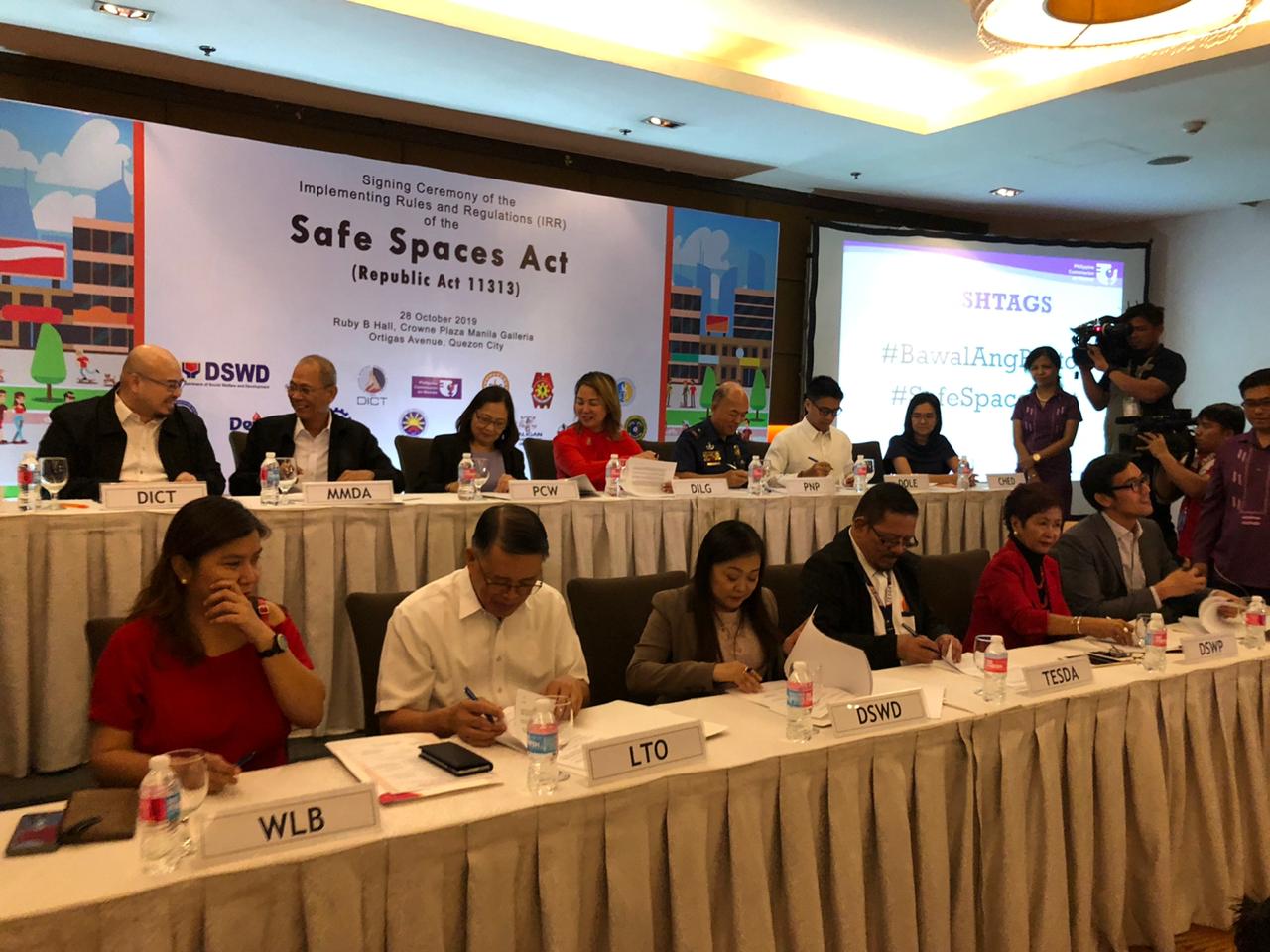 Officials from concerned government agencies and women’s organizations sign the implementing rules and regulations of the Safe Spaces Act or the “Bawal Bastos” law on Oct. 28, 2019 (Photo by Daphne Galvez/ INQUIRER.net

MANILA, Philippines — The implementing rules and regulations (IRR) for a new law that penalizes catcalling, wolf-whistling, sexist and homophobic slurs, unwanted sexual advances and other forms of sexual harassment in public spaces, workplaces, schools, and online were signed on Monday.

Members of the Philippine Commission on Women (PCW) and the Technical Drafting Committee (TDC) led the signing of the IRR of Republic Act 11313 or the Safe Spaces Act or the “Bawal Bastos” law at the Crowne Plaza Manila Galleria in Quezon City.

According to the RA 1131, which was signed by President Rodrigo Duterte last April, actions or deeds considered as gender-based street and public spaces sexual harassment are committed through unwanted and uninvited sexual actions or remarks against any person, regardless of the motive.

It also included gender-based online sexual harassments such as acts that use the information and communications technology in terrorizing and intimidating victims through physical, psychological, and emotional threats, unwanted misogynistic, transphobic, homophobic and sexist remarks and comments online.

The law also strengthens the administrative mechanisms against sexual harassment in workplaces and in education and training institutions.

It also recognizes that sexual harassment may be committed even between peers, or by a student to a teacher, or a trainee to a trainer.

In drafting the IRR, the PCW said the TDC has conducted 14 meetings and regional public consultations in several areas like Baguio, Cebu, Pampanga, Davao, Cotabato, Masbate and Metro Manila.

Senator Risa Hontiveros, who is the author and the principal sponsor of the law at the Senate, described the law as a “game changer” as it will “promote positive policy, behavioral and cultural changes to end gender-based harassment in public spaces.”

If fully implemented, she said it will catalyze change in policies on gender-based public harassment.

Several government agencies, including the Metropolitan Manila Development Authority (MMDA), Department of the Interior and Local Government (DILG), Department of Information and Communications Technology (DICT), have expressed their support in implementing the law.

MMDA chairman Danilo Lim said the agency will give its full support and efforts in ensuring that “no one will experience sexual harassment anywhere again.”

“We won’t allow offenders to get away with it. Anyone should know that sexual harassment promotes disrespect and it is a crime punishable by law,” he said.

Part of the MMDA’s efforts is the installation of additional circuit television cameras (CCTVs) in strategic locations along Metro Manila to deter and apprehend sexual offenders.

IRR will be effective 15 days after its publication. /je