MANILA, Philippines — “I will lead by example.”

This was the pronouncement of newly appointed Supreme Court Chief Justice Diosdado Peralta on Monday as he laid out his ten-point program.

During his first flag raising ceremony as Chief Justice, Peralta called on his fellow magistrates and Supreme Court employees to united and follow the rules.

“First of all, I would like to stress that as the 26th Chief Justice of the Supreme Court and as a long-time public servant, I will lead by example,” Peralta said.

“To achieve our goals and aspirations, each and everyone in the judiciary must be guided by this motto: Let us be united and let us follow the rules,” he added.

Peralta then laid out his ten-point agenda which covers judicative and administrative processes of the Supreme Court. 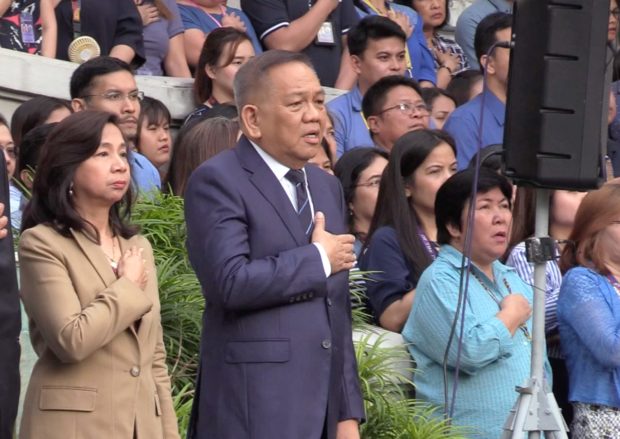 The Chief Justice’s ten-point agenda are as follows:

“My ten-point program is just the beginning and is not exclusive. There is still much to be done and accomplished as regards to case adjudication and court administration,” Peralta said.

“I need your full support and cooperation. I cannot carry out the plans and achieve the goals by myself but as I stressed, I shall lead by example,” he added.

Peralta likewise expressed his gratitude to President Rodrigo Duterte for “entrusting the leadership of the judiciary” to him.

Peralta took his oath before Duterte on October 24, as he replaced former chief justice Lucas Bersamin who retired last October 18.

Peralta started his career in the judiciary as Quezon City Regional Trial Court in 1994 before he was appointed as Sandiganbayan Associate Justice by then-President Gloria Macapagal-Arroyo and became a part of the division that convicted former president Joseph Estrada of plunder.

He was later appointed the Presiding Justice of Sandiganbayan in 2008 before he was appointed as an Associate Justice of the Supreme Court in 2009.  /gsg