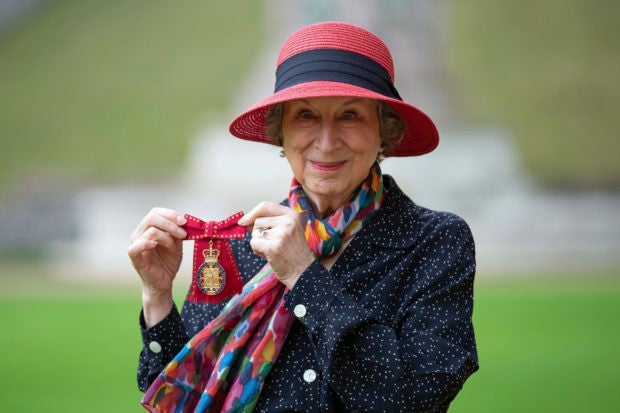 Author Margaret Atwood holds her award after she was made a Companion of Honour by Britain’s Queen Elizabeth II at an investiture ceremony at Windsor Castle, England, Friday Oct. 25, 2019. Image: PA Pool/Aaron Chown via AP

LONDON — Shortly after winning her second Booker Prize, Margaret Atwood has received a rare honor from Queen Elizabeth II for her services to literature.

The Canadian novelist and poet was presented with an Order of the Companions of Honor in a ceremony at Windsor Castle Friday.

She said the experience made her “a bit emotional.”

The Press Association quoted Atwood as saying that “when you see the Queen at her age and her schedule that she puts out, it’s an inspiration to everybody, you just keep going.”

Atwood and British author Bernardine Evaristo split the Booker Prize ten days ago after judges flouted the rule that there should be a single winner. She also won the prestigious fiction award in 2000 and has several American, Canadian and French awards. IB/JB

Pia Wurtzbach writes book based on her pageant struggles