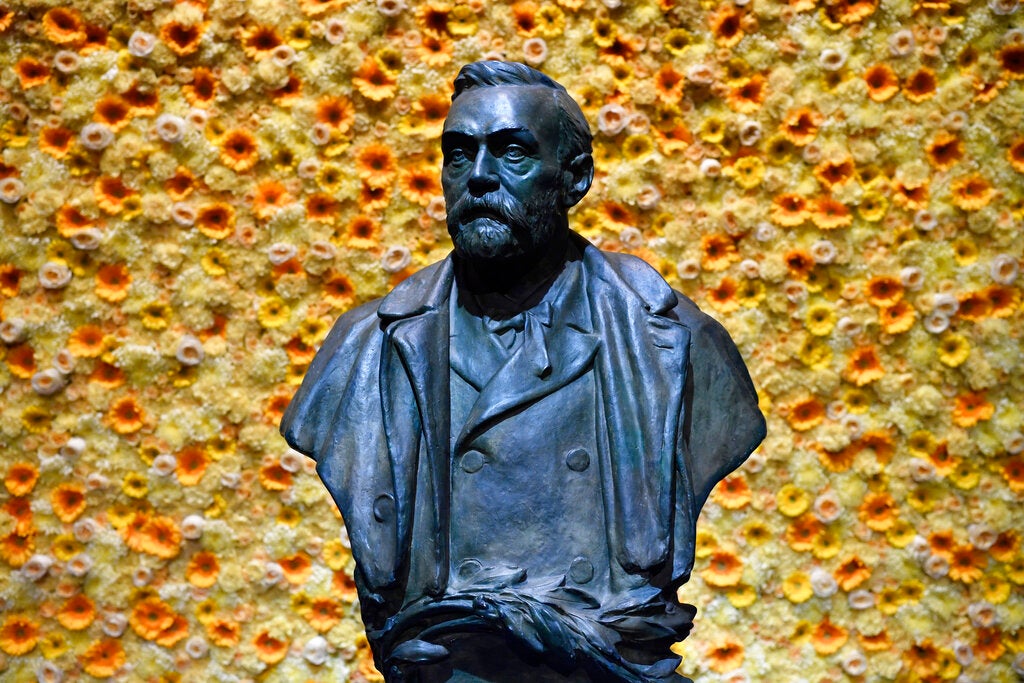 A bust of the Nobel Prize founder, Alfred Nobel, on display at the Concert Hall (Pool Photo via AP)

STAVANGER, Norway — Controversy stalks the Nobel prizes for peace and literature in a way it rarely does for science.

The revamped panel at the Swedish Academy who will hand out the Nobel Literature prizes Thursday for both 2018 and 2019 would relish arguments about the winners, rather than intrigue about the #MeToo scandal that forced the institution to suspend the prize last year.

And U.S. President Donald Trump has done his part to kindle intrigue about the 2019 Peace Prize winner, by simultaneously seeming to pitch himself for the prize while also slamming the Norwegian panel that awards it.

“Controversy is a natural effect of the Literature Prize,” says Mats Malm, the Swedish Academy’s new permanent secretary, appointed to head a reformed 18-person panel after two years of convulsions at the prestigious institution. “We want to contribute to the international discussion about literature and what it is supposed to be.”

The literary science professor is leading an overhaul of the body, which was ripped apart in late 2017 and 2018 by sex assaults involving Jean-Claude Arnault, the husband of a former academy member and a once-notable figure on Sweden’s cultural scene.

Arnault was convicted last year of two rapes in 2011 but not before accusations of abuse had led to an exodus of academy committee members, the ouster of then-Permanent Secretary Sara Danius and the absence of a Nobel Literature prize for the first time since 1943 at the height of World War II.

With a threat hanging from the Nobel Foundation — the body behind the Nobel Prizes — that the Swedish Academy could be stripped of its right to award the prize, the academy brought in five external members to help adjudicate the two literature awards this year. At the same time, it ousted everyone involved in the scandal and it “no longer includes any members who are subject to conflicts of interest or criminal investigations,” according to the foundation.

Across the border, the five-person Norwegian Nobel Institute that oversees the Peace Prize usually claims not to enjoy the controversy that accompanies its choices. But Geir Lundestad, the non-voting secretary of the committee from 1990 to 2014, says some members have traditionally thrived on the controversies that the high-profile prize inevitably brings.

“I am not sure the differences between the two committees are so big. The literature and peace prizes are more accessible to ordinary people than the prizes for medicine, physics and chemistry,” he says. “Some of the members enjoy the controversy that brings. It varies tremendously between members. But many recognize that some sort of controversy goes with the territory.”

The Nobel committees never announce the names of candidates and nominations are not revealed for 50 years.

Lundestad was in charge when the Nobel Peace Prize was awarded to former U.S. President Barack Obama within months of his inauguration in 2009 — a prize that has attracted the ire of Trump, his successor.

Obama was there “for about 15 seconds” before he was awarded the prize, Trump told a press conference in February. Trump has been nominated for the Peace Prize by U.S congressmen for opening a dialogue with North Korea.

“I’ll probably never get it, but that’s OK,” Trump said. “They gave it to Obama. He didn’t even know what he got it for.”

Second-guessing the thinking of the secretive panel is rarely fruitful, but the committee is not immune from the charms of U.S. presidents. As well as Obama, Theodore Roosevelt won it in 1906, Woodrow Wilson took the prize in 1920 and Jimmy Carter was chosen for the award in 2002.

However, a better signal for this year’s award might be former U.S. Vice President Al Gore, who won the Peace Prize alongside the International Panel on Climate Change in 2007. Gore at the time was the face of the climate movement, a mantle now sitting on the slender shoulders of 16-year-old Greta Thunberg of Sweden.

The teenage activist bolstered her profile last month, stepping onto the global stage at the U.N. to berate world leaders.

“How dare you?” she kept saying to some of the world’s most powerful people, accusing them of ignoring the science behind climate change. “You are failing us.”

British bookmakers have Thunberg as the hot peace prize favorite this year, with Trump listed as a rank outsider behind several other world leaders, including two prime ministers, Abiy Ahmed of Ethiopia and Jacinda Ardern of New Zealand, and German Chancellor Angela Merkel.

The panel could also choose to acknowledge the joint leadership of Greece’s Alexis Tsipras and North Macedonia’s Zoran Zaev. The two prime ministers put 30 years of acrimony between their neighboring countries behind them when they agreed that the former Yugoslav republic should officially be renamed from Macedonia to North Macedonia and Greece should drop its objections to its neighbor joining NATO.

On the literature side, the British website Nicer Odds has solved the dilemma of having two winners announced this year by only taking bets on the 2019 winner. Among the favorites are Canadian poet Anne Carson, novelists Maryse Conde of Guadeloupe and Can Xue of China and Canadian writer Margaret Atwood, author of “The Handmaid’s Tale,” which has been made into a hit TV series.

The Nobel week begins Monday with the awards for physiology or medicine. The Physics Prize is handed out Tuesday, chemistry the following day, this year’s double-header Literature Prizes will be awarded Thursday and the Peace Prize will be announced on Friday.

The economics prize — officially known as the Bank of Sweden Prize in Economic Sciences in Memory of Alfred Nobel, which is the only prize not created by the Swedish industrialist and inventor of dynamite — will be awarded on Oct. 14.

Nobel’s reason for having an institution in Norway hand out the Peace Prize while others are awarded in Sweden is unclear, but during his lifetime the two Scandinavian countries were in a union, which was dissolved in 1905.

Nobel fame this year comes with a 9-million kronor ($918,000) cash award, a gold medal and a diploma. The laureates get them at elegant ceremonies in Stockholm and Oslo on Dec. 10 — the anniversary of Nobel’s death in 1896.