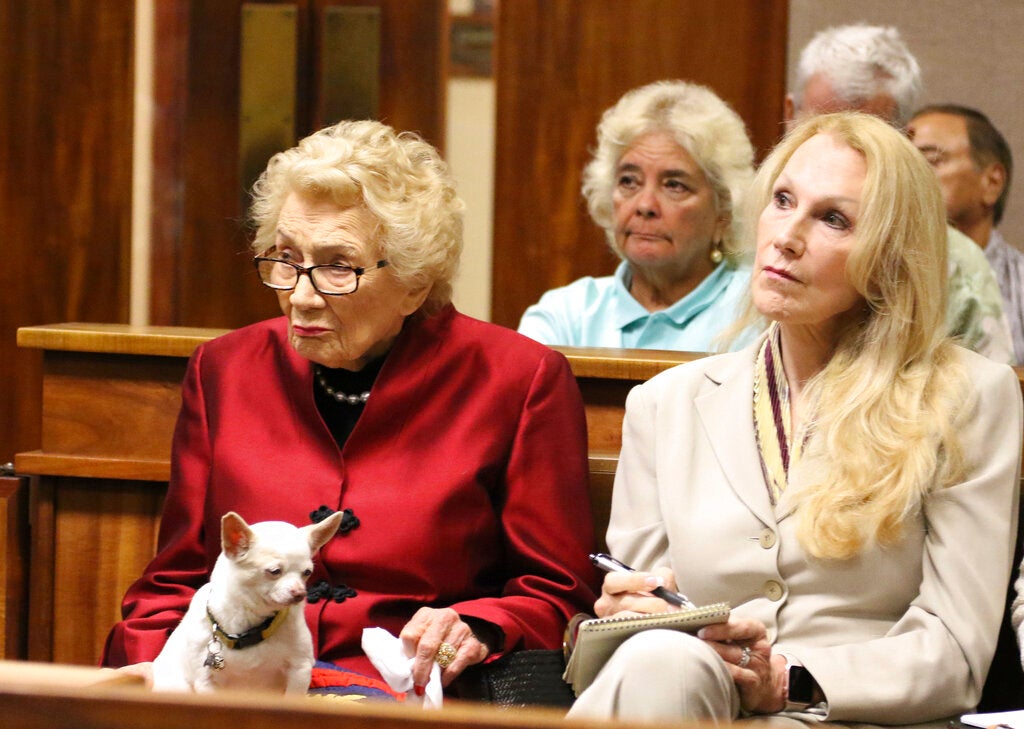 Native Hawaiian heiress Abigail Kawananakoa, left, sits next to her wife, Veronica Gail Worth, while the couple’s Chihuahua sits on her lap during a court hearing in Honolulu, on Friday, Oct. 25, 2019. (AP)

HONOLULU — A 93-year-old heiress doesn’t need a guardian to take care of her, but a hearing will be held to determine whether she needs a conservator to oversee her $215 million trust, a judge ruled Friday in an ongoing battle over her wealth.

Abigail Kawananakoa’s fortune has been tied up in a court case since her 2017 stroke. Her longtime lawyer, Jim Wright, argued the stroke left her impaired, and he stepped in to assume the role of trustee.

Kawananakoa inherited her wealth as the great-granddaughter of James Campbell, an Irish businessman who made his fortune as a sugar plantation owner and one of Hawaii’s largest landowners.

Native Hawaiians consider her a princess because she’s a descendant of the family that ruled the islands before the overthrow of the Hawaiian kingdom in 1893.

They have been closely watching the legal wrangling over her trust because they are concerned about the fate of a foundation she set up to benefit Hawaiian causes.

Wright had appointed three prominent Native Hawaiian leaders to serve as board members for the $100 million foundation Kawananakoa created in 2001. The foundation is participating in the court battle because it is a beneficiary of her trust.

Board members of her foundation and ex-employees say her wife is manipulating her. Lawyers for the couple dispute that.

Petitions for a guardian and a conservator come “from a place of sincere respect and reverence, honoring Ms. Kawananakoa’s lifelong commitment to the Native Hawaiian people,” said David Kauila Kopper, an attorney for the foundation.

She attempted to change her trust last year to ensure her wife receives $40 million and all her personal property, according to court records.

The couple’s lawyers said Friday that Kawananakoa is well-cared for and should be able to do what she wants with her money.

The allegations that she can’t take care of herself or her affairs, is “speculation of the worst kind,” said her attorney, Bruce Voss.

Kawananakoa watched the hearing with the couple’s Chihuahua on her lap, while seated next to Worth.

If Kawananakoa could take the stand and testify, “she would tell you just leave me alone,” Rudy said.

She may have to do exactly that during a future evidentiary hearing to determine whether there should be a conservator. Browning said she will need to undergo a medical examination before the hearing.

It’s a “sad situation,” Kawananakoa said outside the courtroom. “My heritage dictates that I must take care of the Hawaiian people.” 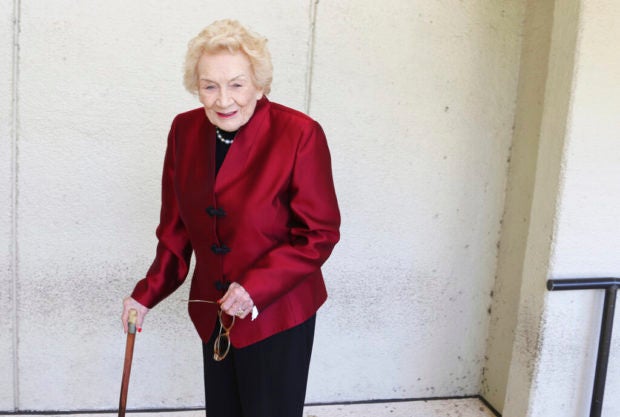 Abigail Kawananakoa poses outside a Honolulu courthouse, on Friday. (AP)

Read Next
Slain Clarin, Misamis Occidental mayor talked to Duterte 2 weeks before death
EDITORS' PICK
PH preps for China virus: Question of when, not if
Beyond water service: Maynilad builds massive infrastructure projects to clean up Metro Manila waterways
Museums ‘put to sleep,’ churches closed amid volcano’s unrest
Seventh judge assigned to handle De Lima case
SM continues to send relief assistance to remote towns in Batangas
Get exciting deals and discounts when you download the new McDonald’s App
MOST READ
Taal Volcano flexes signs of restiveness anew
Passengers from Wuhan, China to be flown out of Kalibo, Aklan – CAAP
Lacson on Duterte’s threat to end VFA over Bato’s canceled visa: Where is the connection?
Part of Aurora Boulevard in Cubao closed from Jan. 25 – Feb. 1
Don't miss out on the latest news and information.