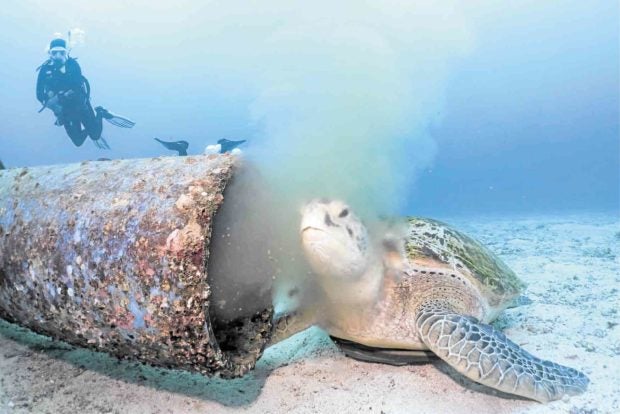 POOR WATER QUALITY Pipes discharging untreated wastewater on the beach of Boracay and into its waters, endangering marine creatures, were among the reasons for the island’s poor water quality. Environment officials claim the illegal pipes had already been detected and plugged or removed. —PHOTO COURTESY OF BORACAY WILSON

BORACAY ISLAND, AKLAN—Is the much-touted rehabilitation of world-renowned Boracay as successful as claimed?

Early last year, President Duterte said the resort island had become a “cesspool” and ordered its shutdown to prevent its further deterioration. Boracay was thus closed to tourists for six months in 2018—from April 26 to Oct. 25.

In his State of the Nation Address last July, the President declared: “We cleaned and rehabilitated the island, and I allowed it to heal naturally. I am proud to say that it has been restored close to its original pristine state.”

But last September, an underwater video of a pipe discharging dark-colored wastewater into the sea went viral. It raised apprehension that the main environmental concern in Boracay—ensuring that water quality is within acceptable standards—has not been fully and strategically addressed.

It also refueled criticism that the hastily implemented six-month closure of the island, which resulted in the loss of jobs for thousands of workers and crippled, if not closed down, many businesses, was unnecessary because rehabilitation activities could have gone on for years.

In fact, a significant number of workers who were laid off or were told to temporarily stop working during the six-month shutdown have not returned to work even if most business establishments resumed operations when the island was reopened to tourists a year ago.

One hotel official said about 40 percent of their workers found jobs elsewhere during the shutdown.

For alleged negligence in the management of Boracay Island, complaints were filed against 17 officials, including Aklan Gov. Florencio Miraflores and Mayor Ciceron Cawaling and all municipal councilors of Malay.

In April 2018, the Office of the Ombudsman dismissed the complaint against all of the officials, except for two: Cawaling and municipal licensing officer Jen Salsona. They were found guilty of grave misconduct, gross neglect of duty, conduct unbecoming of a public official and conduct prejudicial to the best interest of the service.

Cawaling won as mayor in this year’s elections but was prevented by the Department of the Interior and Local Government from assuming office pending the resolution of his appeal on his dismissal.

In November last year, the National Bureau of Investigation filed graft and malversation complaints at the Office of the Ombudsman against former and incumbent officials of Malay for the alleged misuse of millions of pesos in environmental fees collected from tourists.

But one respondent claimed to have yet to receive a subpoena or order from the Ombudsman in connection with the NBI complaints almost a year after these were filed.

Interior Undersecretary Epimaco Densing III said he and other officials were also still awaiting the report of the Commission on Audit on the use of the environmental fees collected from tourists visiting Boracay.

The report will be the basis for the possible filing of administrative cases against the former and incumbent officials. 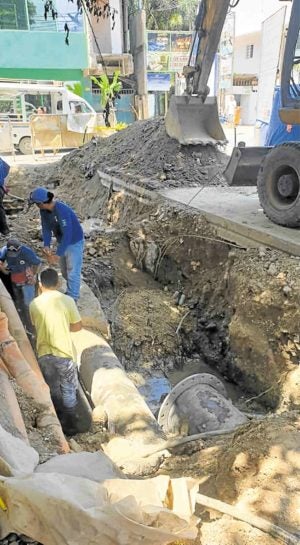 STILL UPGRADING Nearly a year after the reopening of Boracay, the coverage of the centralized sewer system remains at its preclosure area of 61 percent of the 1,032-hectare island. Boracay Island Water Co., a water service provider controlled by the Ayala subsidiary Manila Water, says its focus had been on the upgrading of sewer pipes along the island’s main road and the putting up of individual sewage treatment plants. —PHOTO COURTESY OF BORACAY REHABILITATION CONTINUES

During the shutdown, the Department of Environment and Natural Resources (DENR) required commercial establishments, especially those along the beach front, that were not connected to the centralized sewer system, to put up individual or clustered sewage treatment plants (STPs).

A modular STP costs from P2.5 million to P3 million.

The DENR subsequently entered into a controversial agreement with Boracay Tubi System Inc. (BTSI), controlled by MacroAsia Corp., to build 105 STPs on the island.

A number of business operators and residents questioned the mandatory putting up of STPs for the reason that a centralized sewage treatment system already existed. The system is operated by the water service provider, Boracay Island Water Co. (BIWC), controlled by the Ayala subsidiary Manila Water.

According to business operators, efforts should have been focused on ensuring that establishments were connected to the centralized sewer system. They said individual STPs would be difficult to monitor and regulate and would increase the risk of the discharge of untreated wastewater.

The pipe, stretching a kilometer from the shoreline to the sea, was supposed to discharge treated wastewater from at least 49 STPs of hotels and resorts.

The DENR’s Environmental Management Bureau (EMB) issued a cease-and-desist order on BTSI after water samples taken from the mouth of the outfall failed acceptable levels of fecal coliform bacteria and phosphate.

But the order was lifted on Sept. 24, after the water quality at the outfall reached acceptable standards, according to lawyer Ramar Neil Pascua, DENR-EMB Western Visayas director.

Pascua said BTSI’s violation had been endorsed to the DENR’s Pollution and Adjudication Board for the meting of a recommended maximum fine of P321,000 per day for eight days, or P2.56 million.

In a statement released a week after the cease-and-desist order was issued, BTSI said it had resolved the issue. It cited results of a joint sampling with the DENR conducted on Sept. 21 showing fecal coliform bacteria within tolerable levels.

It said that all wastewater was being treated on-site at the STP of establishments, and that excess water passed an interceptor before being discharged into the sea.

Pipes discharging untreated wastewater on the beach and into the drainage system were among the factors cited for the poor water quality of Boracay.

But the DENR claimed that these illegal pipes were detected and plugged or removed during the island’s shutdown.

Environment Secretary Roy Cimatu earlier claimed that the highest coliform bacteria level in the past months was 40 (most probable number/100 milliliters), way lower than the acceptable level of 100 MPN/100 ml.

BIWC also installed individual STPs for 13 establishments, according to Blanca Eunicia Aldaba, its head of business operations. It is also upgrading the sewer line on the island’s main road.

Connections to the centralized sewer system operated by BIWC increased from 1,189 in December 2018 to 1,350 this year.

But nearly a year after the reopening of Boracay, the coverage of the centralized sewer system remains at its preclosure area of 61 percent of the 1,032-hectare island.

Aldaba said the focus had been on the upgrading of sewer pipes along the main road and the putting up of individual STPs.

BIWC is operating two centralized STPs, one each in Barangays Manoc-Manoc and Balabag, which have been compliant with environmental and water quality standards.

Construction of a third STP in Barangay Yapak, at the northern end of the island, will start in the third quarter of 2020 and is due for completion in the first quarter of 2023. This will make the island fully covered by the sewer system.

BIWC has begun putting up the pipes going to Yapak, with 17 percent completed as of Sept. 27. Completion is due next year, according to Aldaba.