China urges joint fight on smuggling after deaths in Britain 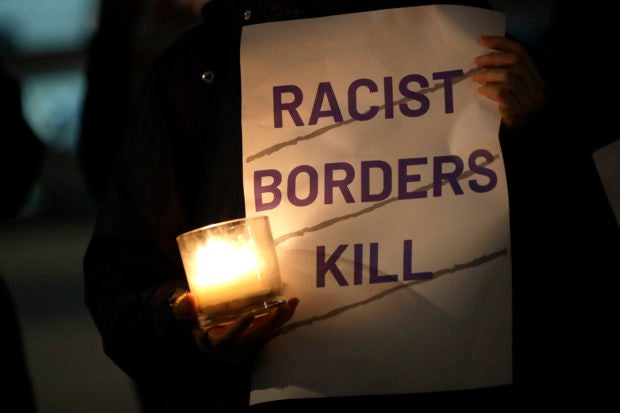 A demonstrator holds a candle and a banner during a vigil for the 39 lorry victims, outside the Home Office in London, Thursday, Oct. 24, 2019. Authorities found 39 people dead in a truck in an industrial park in southeast England on Wednesday and arrested the driver on suspicion of murder in one of Britain’s worst human-smuggling tragedies. (AP Photo/Kirsty Wigglesworth)

BEIJING — China called Friday for joint efforts to counter human smuggling after the discovery in Britain of 39 dead people believed to be Chinese migrants who stowed away in a shipping container.

Foreign ministry spokeswoman Hua Chunying told reporters at a daily briefing that China could not yet confirm the victims’ nationalities or identities but was working in cooperation with local authorities.

“The British police are still in the intensive process of verification and are still unable to confirm at the moment,” Hua said.

“But I think that no matter where these victims come from, this is a great tragedy which drew the attention of the international community to the issue of illegal immigration,” she also said.

“I think the international community should further strengthen cooperation in this area, strengthen the sharing of information and intelligence in this regard, and conduct an early intervention in these activities so as to prevent such tragedies from happening again in the future,” she added.

Hua further said Chinese authorities were also seeking information from police in Belgium, from where the shipping container in which the bodies were found was transported to England.

Human smuggling from China is believed to have fallen drastically in recent years amid a rapidly growing domestic economy. However, some Chinese, particularly those with lower education levels, continue to be drawn to Europe and North America by the promise of much higher wages than they can earn at home, despite the considerable risks involved.

Parts of China, especially the southeastern province of Fujian, have long histories of sending migrants abroad.

The issue is a difficult one to confront for China’s ruling Communist Party, which is intensely sensitive about China’s international image and has staked much of its legitimacy to rule on improving living standards for the bulk of China’s 1.4 billion people.

In an editorial Friday, the party newspaper Global Times said authorities in Britain and elsewhere hadn’t done enough to crack down on people smuggling.

“Such a serious humanitarian disaster occurred under the eyes of the British and Europeans,” the newspaper said. “Britain and the related European countries have not met their responsibility for protecting these people from dying in such a manner.” /kga