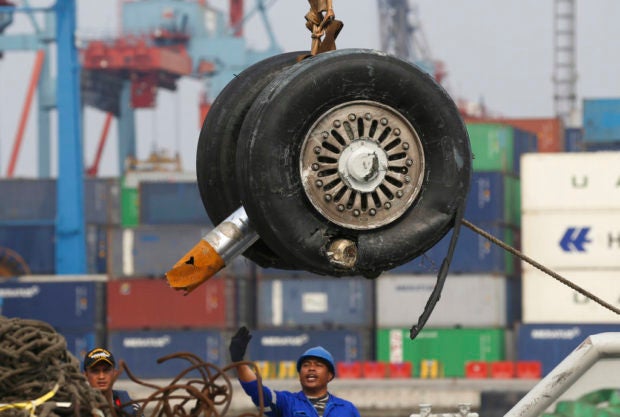 In this November 3, 2018, file photo, a crane moves a pair of wheels recovered from the Lion Air jet that crashed into the Java Sea on October 29, 2018. Indonesian probers said in a report released Friday, October 25, 2019, that the jet that crashed and killed 189 people a year ago was doomed by a combination of aircraft design flaws, inadequate training, and maintenance problems. (AP File Photo/Achmad Ibrahim, File)

JAKARTA — An Indonesian investigation found a Lion Air flight that crashed and killed 189 people a year ago was doomed by a combination of aircraft design flaws, inadequate training, and maintenance problems.

A final accident report released Friday said Lion Air flight 610, from Indonesia’s capital Jakarta to the island of Sumatra, crashed because the pilots were never told how to quickly respond to malfunctions of the Boeing 737 Max 8 jet’s automated flight-control system.

The jet plunged into the Java Sea just 13 minutes after its takeoff on October 29, 2018.

Indonesia’s National Transportation Safety Committee said the automated system, known as MCAS, relied on a single “angle of attack” sensor that provided erroneous information, automatically shoving the nose of the Max jet down.

The report also identified various missteps prior to the crash. The aircraft, only in use for two months, had problems on its last four flights, including one the day before its fatal accident.

The Indonesian report followed another last month from U.S. federal accident investigators, who concluded that Boeing and the Federal Aviation Administration underestimated how a blizzard of visual and auditory warnings would slow pilots’ ability to respond quickly enough to avert crashes.

Just five months after the Indonesian crash, the same kind of malfunction caused a Max jet to crash in Ethiopia, killing all 157 people on board.

That led to the grounding of all 737 Max jets internationally and put Boeing under intense pressure to explain problems associated with the MCAS system. The aircraft still has not resumed flying.

Boeing recently reported its third-quarter earnings dropped 51% to $1.17 billion in part because it added $900 million more in costs for the Max.

“We are very angry (at Boeing) because their negligence has caused our loved ones to die,” said Muhammad Asdori, 55, whose brother and nephew were killed in the Lion Air crash.

“They should have anticipated any kind of problems with adequate training for pilots, who fly their planes. We were even (angrier) when we learned that they had only admitted their mistake when the second MAX8 plane crashed in Ethiopia.” /kga