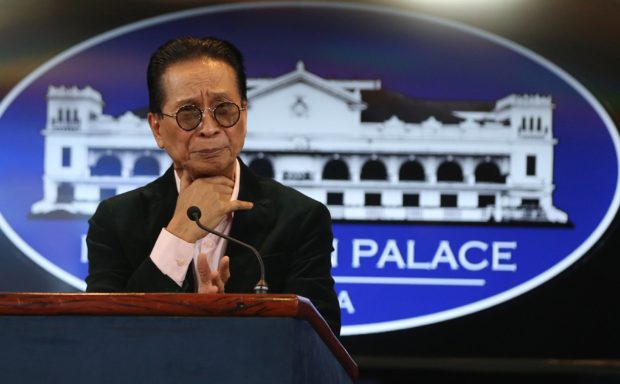 MANILA, Philippines—The government will continue to “hustle” in its fight against poverty and hunger, Malacañang said Friday as it welcomed the reported drop in the self-rated hunger rate in the third quarter of 2019.

According to a survey by the Social Weather Stations (SWS), around 9.1 percent of Filipino families have experienced involuntary hunger, which amounts to roughly 2.3 million Filipino families.

This is slightly lower to the 10 percent or 2.5 million hungry Filipino families recorded in June 2019.

Despite the slight drop in self-rated hunger rate, presidential spokesman Salvador Panelo said the government would not “rest on its laurels” and would instead continue to launch programs aimed at arresting hunger.

“Despite this, as well as the countless accomplishments it has attained, this Administration has never had an attitude to laze away or rest on its laurels,” he said.

“The Chief Executive, together with his official family and their work forces, will therefore continue to hustle, not only to uplift more Filipino families out of the quagmire of indigence and hunger but also, to prevent our countrymen from falling or reverting back to poverty by addressing its very root causes,” he added.

According to Panelo, who is also President Rodrigo Duterte’s chief legal counsel, the drop in hunger rate was among the reasons the President continues to enjoy high public trust and approval rating.

The 9.1 percent hunger rate, however, is the lowest under the Duterte administration, after it peaked to 15.9 percent in December 2017.