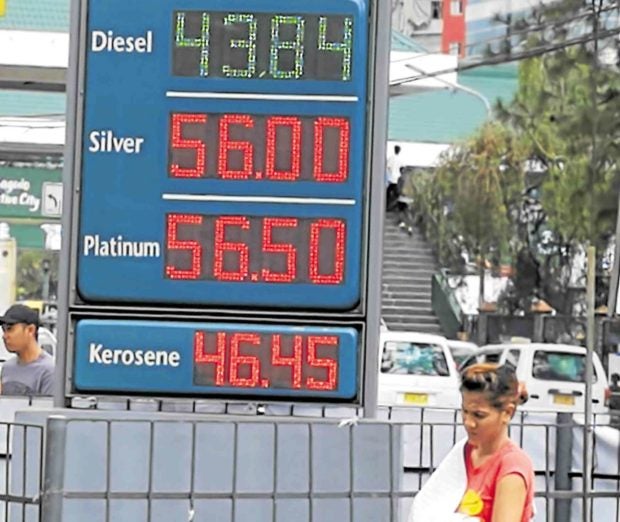 PRICE CUTA liter of fuel in Baguio is priced P9 higher than those sold in its neighboring lowland provinces. Motorists, however, are greeted by reduced pump prices on Thursday after a price rollback in several gasoline stations in the city. —EV ESPIRITU

BAGUIO CITY—Gas pumps in the city saw significant price reductions on Thursday, a day before the deadline set by the Department of Energy (DOE) for 34 gasoline dealers to explain the “sky-high” prices of fuel products here.

Caltex, Petron and Total slashed their diesel prices by more than P3 a liter, their local suppliers here said.

Petron and Total sold diesel at P43.85 a liter starting on Thursday morning.

Shell stations here did not receive instructions about lowering prices and their dealers declined to comment on the call for price reduction.

Gas stations here received show-cause orders from the DOE to present their profit statements and supply expenditures to explain why fuel was priced P9 higher than those sold in neighboring areas.

They were given until Oct. 25 to submit their respective finance statements as well as a matrix of their supply chain.

He said only Charmaine Canillas, Petron assistant vice president for corporate affairs, was present during the meeting.

“Petron will reduce fuel prices by as much as P3. Accordingly, the reduction will have a substantial impact on its profit but it is worth helping Baguio,” Magalong said in a statement, citing the commitment made by Canillas after their meeting.

He said Shell and Caltex officials had earlier told him that they were also willing to consider reducing their fuel prices.

In 2014, fuel prices in Baguio shot up by as much as P14. Last year, the top gasoline suppliers were forced to scale back prices when these shot up to P67 a liter.

The DOE then demanded them to explain a 13.9-percent markup when the cost of transporting gasoline was 18 centavos a liter consumed in a 68-kilometer trip from the oil depot in La Union province to Baguio. —WITH A REPORT FROM VALERIE DAMIAN