MANILA, Philippines — Thousands of guns and ammunition were destroyed by the Philippine military on Thursday in a bid to eradicate illegal and loose firearms in the country.

The stockpile, which includes 1,561 firearms from Luzon and 55,730 magazines from across the Philippines, was destroyed at the General Headquarters Supply Unit Camp A at Camp Aguinaldo in Quezon City.

Armed Forces of the Philippines public affairs chief Capt. Jonathan Zata said the firearms and magazines were either captured, confiscated, surrendered, and recovered (CCSR) through military operations and community engagements up to 2016.

These CCSR firearms and their various accessories undergo a process of identification and verification, he said.

“Those that will not be used as evidence in court and are not subjected to the Enhanced Comprehensive Local Integration Program will not be destroyed and will be turned over to proper authorities,” Zata said in a statement. 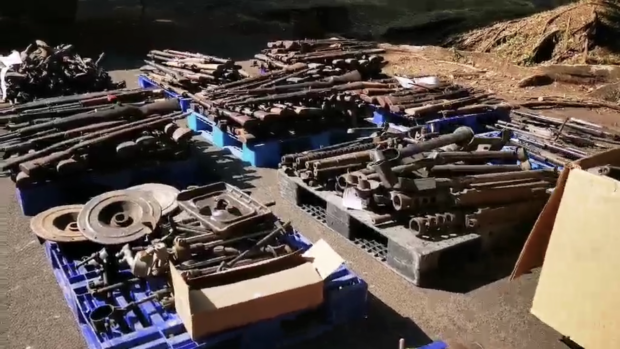 This photo shows the stockpile of illegal and loose firearms that will be destroyed by the Philippine military on Thursday, October 24, 2019. Screengrab from AFP Public Affairs Office

Meanwhile, those with defaced serial numbers will go through identification to determine its ownership, while the non-standard items will be destroyed.

The ceremonial demilitarization, held as part of the 12th founding anniversary of the AFP Munitions Control Center, was attended by AFP deputy chief of staff Maj. Gen. Erickson Gloria.

“This program will significantly reduce the number of unserviceable CCSR firearms and eventually dispose (of) all unofficial and dilapidated weapons in the inventory of the AFP…This translates to the 90% completion of the demilitarization program of the Philippine Army,” Gloria read from a prepared speech of AFP vice chief Vice Adm. Gaudencio Collado Jr. /kga