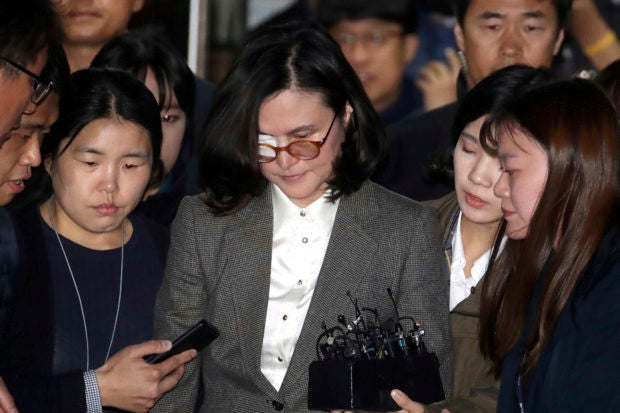 The Seoul Central District Court said a judge issued an arrest warrant for Chung Kyung-shim over concerns that she might attempt to destroy evidence as prosecutors investigate her suspected involvement in dubious financial investments and creating fake credentials to help her daughter get into medical school.

Chung, a university professor, and her husband Cho Kuk have denied legal wrongdoing, although Cho has apologized over alleged perks his daughter received.

Cho’s resignation came after huge crowds of his supporters and critics marched in South Korea’s capital for weeks, demonstrating how the monthslong saga has deepened the country’s political divide.

Before Cho’s resignation as justice minister, South Korean President Moon Jae-in had stood firmly by the key political ally he appointed in September despite parliamentary resistance. But the controversy surrounding Cho’s family has caused the president’s popularity to plummet ahead of critical legislative elections next spring.

Prosecutors had already indicted Chung last month on suspicions of manipulating an award issued to her daughter from a university in the southern town of Yeongju where she works as a professor.

Allegations that Cho’s daughter received special treatment in her admissions to a top university in Seoul and a medical school in Busan have struck a nerve in a country where teenagers toil in hyper-competitive school environments because graduating from elite universities is seen as crucial to career prospects.

Chung is also suspected of involvement in running a private-equity fund financed by Cho’s family that allegedly made dubious investments while Cho served as Moon’s secretary for civil affairs until July. Prosecutors last month arrested a relative of Cho over suspicions of fraud, embezzlement and attempting to destroy evidence linked to his management of the fund.

Moon’s liberal Minjoo Party, which have previously accused the prosecution of pushing an excessive probe against Cho’s family to resist his reform plans focused on curtailing prosecutors’ powers, did not comment on Chung’s arrest. The conservative Liberty Korea Party welcomed Chung’s arrest and called for prosecutors to expand their probe to Cho. /gsg