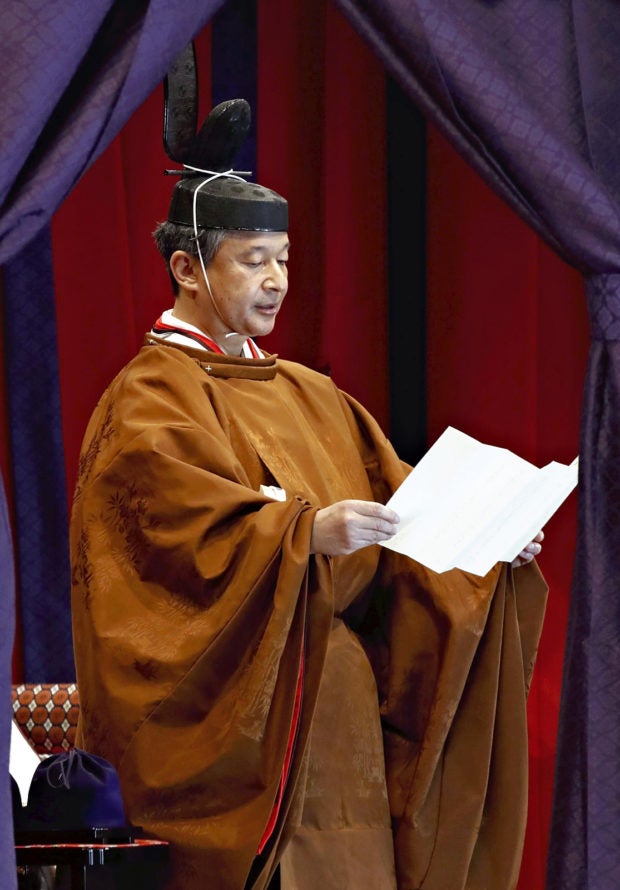 TOKYO — The Emperor’s remarks during Tuesday’s Sokuirei-Seiden-no-Gi ceremony hewed closely to those the Emperor Emeritus expressed at the start of the Heisei era (1989-2019).

Among various subtle changes, he expressed his determination to inherit his father’s practice of being an “active emperor,” and to adopt an outlook that is not limited to Japan, but also includes trends from the rest of the world.

Determination to be active

The Emperor revised the written drafts of his remarks, right up until they were decided by the Cabinet on Oct. 15, according to an aide to the Imperial family.

The structure of his remarks was the same as those his father gave, including three elements: the basis for his enthronement; recognizing the achievements of the previous Emperor and pledging to serve as the new Emperor; and a message to Japan’s citizens.

His remarks on the achievements of the previous Emperor were notable. He described the Emperor Emeritus as “always sharing in the joys and sorrows of the people, and showing compassion through his own bearing.”

This can be interpreted as the Emperor expressing his determination to carry on his father’s practice of being an active Emperor such as by visiting areas struck by major disasters and placing importance on trips to distant lands and remote islands.

What was even more distinctive was the Emperor not only wished for “the happiness of the people,” as his father did, but also for “the peace of the world.”

He is the first emperor to have studied abroad, having spent time at Oxford University in Britain. While crown prince, he was involved in global hygiene and poverty issues as part of time spent serving as honorary president of the U.N. Advisory Board on Water and Sanitation.

“With the global situation becoming more chaotic, the Emperor, who has ample international experience, seems to have a deep desire for world peace, as this also affects the lives of the people of Japan,” said Hajime Sebata, a part-time lecturer at Seijo University who specializes in modern Japanese history.

The Emperor’s beliefs are also colored by his thoughts about the general public. The Emperor added the words “turning my thoughts to the people and standing by them” to his pledge to serve as the symbol of the state.

This indicates an intention to deepen the posture of being close to the people, something built by the Emperor Emeritus, and to be active among them.