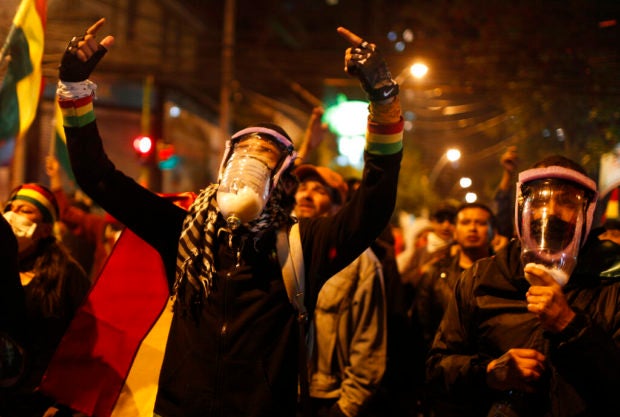 The European Union and Organization of American States both expressed alarm after Morales suddenly shot upward in the quick count Monday following a day-long pause in results.

Morales’ opponents burned election offices and ballots in several cities and called for a strike Wednesday, accusing the leftist leader of trying to avoid a December runoff in which he would confront a united opposition.

Tensions rose when officials abruptly stopped releasing results from the official quick count of votes hours after the polls closed Sunday. The last numbers released before Monday night had showed Morales topping the eight other candidates, but also falling several percentage points short of the percentage needed to avoid the first runoff in his nearly 14 years in power.

Yet, the president claimed an outright victory late Sunday, telling supporters that the votes still to be counted — largely from rural areas where he is most popular — would be enough to give him an outright victory. “The people again imposed their will,” he said.

That set off an uproar among the opposition and expressions of concern by international monitors.

“The unexpected interruption of the electronic vote counting after the first round of the general elections in Bolivia has sparked serious concerns that need to be fully and swiftly addressed,” the European Union said.

But a more formal official count running simultaneously, if more slowly, showed a closer race: With just under 96% of polling places counted in that process as of late Tuesday, Morales led by 8.45 percentage points.

Mesa, who stepped down as president in 2005 amid an outbreak of demonstrations led by Morales, then the leader of a coca growers union, called on citizens and civic groups “to conduct a battle in defense of the vote.”

“They can’t take away democracy from us,” he said at a gathering of his supporters in Santa Cruz, a stronghold of opposition to Morales.

The OAS observer mission issued a statement calling on electoral officials “to firmly defend the will of the Bolivian citizenry.”

“The OAS Mission expresses its deep concern and surprise at the drastic and hard-to-explain change in the trend of the preliminary results revealed after the closing of the polls,” it added following the updated quick count..

The foreign ministries of Argentina, Brazil and Colombia also expressed concerns about the situation.

Meanwhile, Bolivia’s interior minister, Carlos Romero, accused the opposition of trying to create turmoil and warned that “they have to take care of the violence they’re generating.”

Protests multiplied across Bolivia outside vote-counting centers after the release of vote returns resumed. In Sucre, opponents of Morales set fire to the regional headquarters of the electoral court while shouting: “Respect my vote!”

Rioting was reported in five more of Bolivia’s nine regions. In the national capital of La Paz, police used tear gas trying to quell fighting between supporters of Morales and Mesa outside a vote-counting center. Protesters threw firecrackers and stones.

“There is a heightened risk of social unrest at the moment,” Rodrigo Riaza, a research analyst for Latin America and the Caribbean at the Economist Intelligence Unit, said earlier in the day.

But he said he doubted an eruption of protests would probably unseat Morales. “International support would be weak, as there is little appetite in the region to contest Morales’ legitimacy,” Riaza said.

Morales, 59, a native Aymara from Bolivia’s highlands, became the country’ first indigenous president in 2006 and easily won the two following elections amid more than a decade of a commodities-fed economic boom in South America’s poorest country. He paved roads, sent Bolivia’s first satellite to space and curbed inflation.

But he has faced growing dissatisfaction, especially over his refusal to accept the results of a 2016 referendum to keep limits on presidential terms. The country’s top court, considered by critics as friendly to the president, ruled that limits would violate Morales’ political rights as a citizen.

Being forced into a runoff would be a sharp blow to Morales, “whose political success has been impressive and who seemed confident of a first-round win,” said Michael Shifter, head of the Inter-American Dialogue, a Washington-based think tank. /jpv