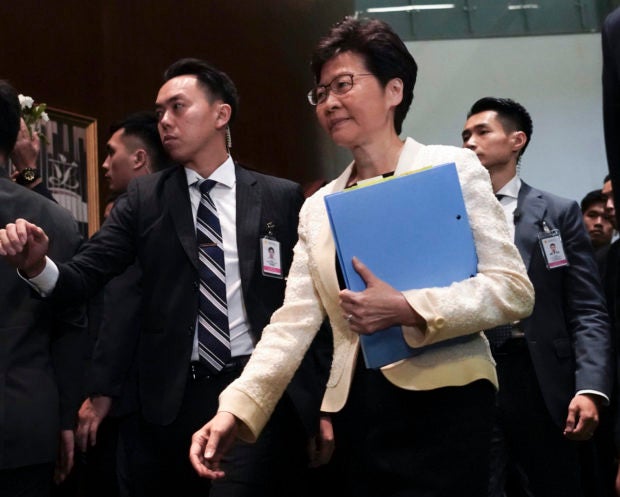 FILE – In this Oct. 17, 2019, file photo, Hong Kong Chief Executive Carrie Lam, center, arrives at chamber of the Legislative Council in Hong Kong. Hong Kong is feuding with Taiwan over a fugitive murder suspect whose case indirectly sparked the protests in Hong Kong over an extradition bill. Hong Kong officials pleaded on Tuesday, Oct. 22, for authorities in Taiwan to let the man surrender himself for killing his girlfriend while visiting the self-ruled island last year.(AP Photo/Vincent Yu, File)

The security chief is due on Wednesday to announce the bill’s withdrawal in the city’s legislature.

Hong Kong leader Carrie Lam had proposed the amendments to resolve a case involving a man wanted for murder in Taiwan who could not be sent to the self-ruled island because there was no extradition agreement in place.

But the proposal stoked widespread fears residents of Hong Kong, which maintains its own independent courts, would be put at risk of being sent into mainland China’s Communist Party-controlled judicial system. Lam was forced to announce last month that she would drop the bill in the face of fierce opposition.

The protests erupted in early June and snowballed into the city’s biggest political crisis in decades, expanding to demands for universal suffrage and an investigation into police tactics.

Scrapping the bill meets one of protesters’ five key demands, but activists have vowed not to yield until the government fulfills all of them. They also include an independent inquiry into allegations of police brutality during the protests, the unconditional release of those detained, not labelling the protests as riots, and direct elections for the city’s leader.

Also Wednesday, the murder suspect at the heart of the extradition case controversy, Chan Tong-kai, was released from prison after serving a separate sentence for money laundering. He indicated his desire to turn himself into authorities in Taiwan, where he’s wanted for killing his pregnant girlfriend, Poon Hiu-wing.

“I am willing, for my impulsive actions and things I did wrong, to surrender myself, to return to Taiwan to face sentencing and stand trial,” he said.

In the days leading up to his release, Hong Kong and Taiwan feuded over his case after Chan had offered to return voluntarily to Taiwan.

Taiwan objected to allowing him the freedom to travel and instead offered to send a team to escort him back, but Hong Kong’s government refused, saying Taiwanese officers could not enforce the law in Hong Kong.

Taiwan’s Mainland Affairs Council said allowing a murder suspect to fly on his own would ignore the safety of other passengers and that Hong Kong’s approach would indulge Chan and make Hong Kong “a criminal paradise where murderers can walk around.”

Underlying the dispute is Taiwan’s desire for a “mutual legal assistance” deal with Hong Kong. But formal cooperation with Taiwan would require Hong Kong to recognize the island’s legal bodies as a legitimate official authority, which China’s ruling Communist Party wouldn’t stomach because it considers Taiwan a breakaway province and refuses to acknowledge the administration of directly elected President Tsai Ing-wen. /gsg