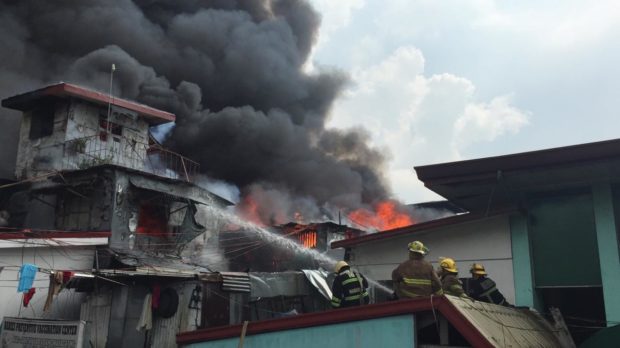 A fire rages on at a residential area along Quiricada corner Rizal Ave. in Manila on Tuesday. INQUIRER photo / Marianne Bermudez

In a tweet, TXTFIREPhilippines said the blaze, which started at 11:50 a.m., engulfed several houses along Quiricada Street in Sta. Cruz, Manila.

As firemen responded to put out the fire, it was already on its second alarm.

After 30 minutes, the fire was raised to Task Force Alpha level. At 12:29 p.m., the blaze reached Task Force Bravo level.

After more than one hour, the blaze was declared under control.

According to the Manila Public Information Office, personnel of Manila Disaster Risk Reduction and Management Office are also helping in extinguishing the fire.

Around 100 houses were affected while the fire left P800,000 worth of damage.

The incident is still under investigation. /jpv