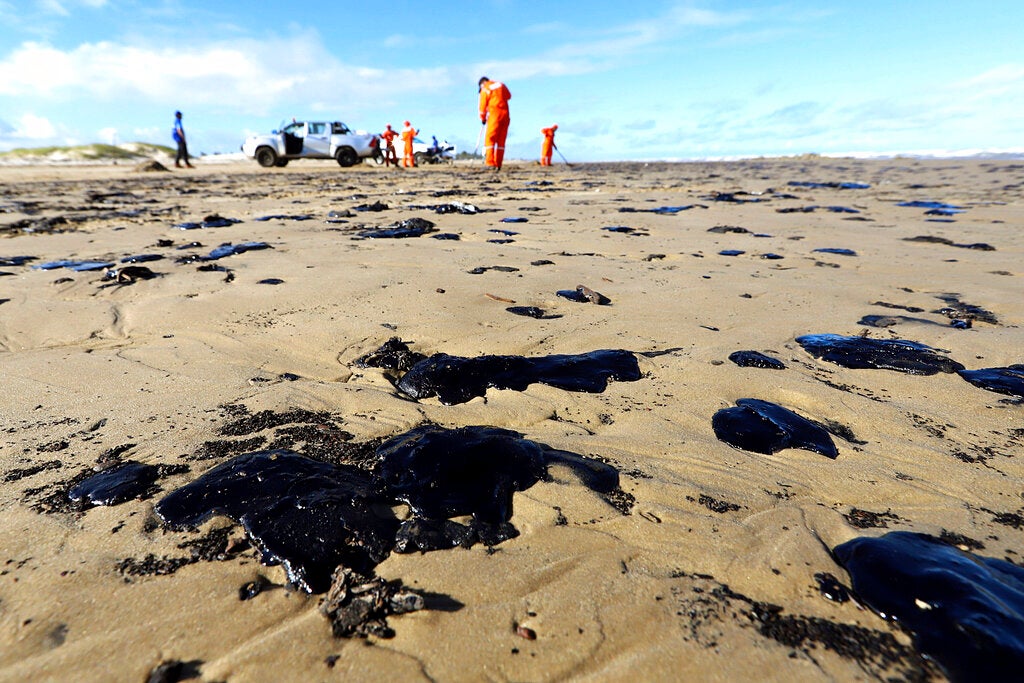 Workers remove oil from Viral Beach, in Aracaju, Brazil. The oil that has been polluting Brazil’s northeastern beaches since early September is likely coming from Venezuela, according to a report by Brazil’s state oil company cited by the country’s environment minister. (Aracaju Municipal Press Office via AP)

RIO DE JANEIRO  — With pressure from the public and courts growing for Brazil’s government to do more, Vice President Hamilton Mourão said Monday that 5,000 more troops will be dispatched to help clean up oil polluting the nation’s northeastern coast.

Mourão told reporters about 600 tons of crude had been recovered since the sludge began appearing at the start of September. He said the origin of the leak remained unknown.

“The most we can do today is have trained people to collect this oil that is reaching our beaches,” Mourão said, adding that investigations into the source of the contamination continued.

The crude has washed up on at least 200 beaches in nine Brazilian states, according to the most-recent report from the country’s environmental regulator, Ibama.

Oceanographers and environmental groups have been criticizing the government’s response as slow and ineffective, and many Brazilians are working to clean beaches themselves.

The government suffered similar criticism when fires destroyed large swaths of the Amazon region in June and July. It eventually sent soldiers to help local firefighters extinguish the blazes.

In the oil spill, 1,500 troops had already been deployed in various locations. Environmental groups say the number of servicemen is insufficient considering that contamination spreads over 1,300 miles of coastline.

Federal courts in Pernambuco and Alagoas states said the government had 24 hours to install protection barriers around sensitive natural areas and ecosystems such as mangroves, rivers and sea turtle spawning areas.

Mouão said all necessary means were adopted for the crude’s collection, reiterating prior comments from the environment minister.